Cubone (Japanese: カラカラ Karakara) is a Ground-Type Pokémon introduced in Generation I.

Cubone, known as the Lonely Pokémon, appears to be a small, brown, dinosaur-like Pokémon that constantly wears its deceased mother's skull like a helmet. The skull masks its true face from view, which makes it a puzzlement for many Trainers and researchers. Its cries echo within the skull and it comes out as a pained and sad melody. On the night of a full moon, it cries, for it seems to recognize its mother's face in the moon. Its tears create stains on the skull. Cubone has a plump body with a paler-colored underbelly, with strong, clawed limbs to carry a bone as a weapon around wherever it goes. Cubone has a single, nailed toe on each foot, with two spikes on its back. A small tail is also present for balance, but it can be used for attacking.

Cubone can have the ability Rock Head or the ability Lightningrod. Rock Head prevents Cubone from receiving recoil damage. Lightningrod targets all Electric-type attacks towards Cubone. Cubone's real face has never been seen before, thanks to its bone mask. When it thinks of its dead mother, it cries. Its crying makes the skull it wears rattle loudly.

Cubone evolves into Marowak at level 28.

In the anime, Cubone first appeared in The School of Hard Knocks under the ownership of a pretty yet snobby Pokémon Academy student named Giselle, who battled her Cubone against Ash's Pikachu. A Cubone was among the four Pokémon that were causing trouble for Pikachu and co. during Pikachu's Vacation. A Cubone was seen helping Team Rocket's Meowth prepare his party in Pichu Bros. in Party Panic. This Cubone played drums in Meowth's band and got easily sad and gloomy when Meowth chewed it out, but it was also easily consolable.

In the Pokémon Adventures manga, Cubone makes a cameo in Onix is On!, part of the Red, Green & Blue chapter, battling against Red's Bulbasaur as a Pewter Gym trainer's Pokémon. Super Nerd William used a Marowak to attack Yellow using its Bonemerang. Crystal owns a Cubone, who has a star-shaped crack in its skull. Cubone's main role in the team is to take out targets from afar using its bone-based attacks.

"A Lonely Pokémon. It wears its mother's skull as a helmet--for this reason, no one has ever seen its face. It sometimes sees its departed mother's face in the full moon, which causes it to grow sad and cry. The stains on the skull are tracks of its tears. When it cries, the skull shakes and emits a mournful sound. When it levels up, it evolves into Marowak." 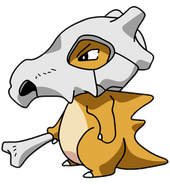 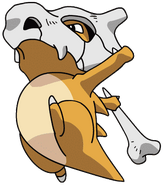 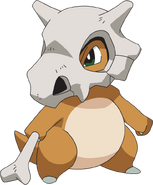 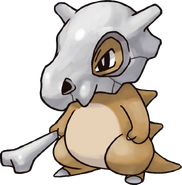 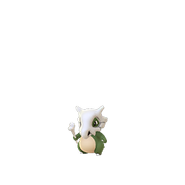 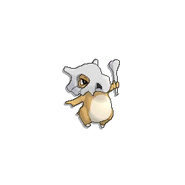 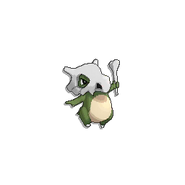