Crystal Chapter is the fourth Chapter (officialy a continuation of the third) of Pokémon Adventures manga. It is based on the game, Crystal. It consists of five volumes.

Since Prof. Oak is too old to catch Pokémon, yet he needs to study them, he and Elm have Crystal (nicknamed Crys), a professional at catching Pokémon, to capture the Pokémon they need to study. After many troubles going through to catch Pokémon with her newest addition, Chikorita, meets a Pokémon sparkling like a crystal, Suicune. In her seChapterh, she meets a fellow Suicune hunter named Eusine, but hears Team Rocket is on the loose. While Eusine deals with Team Rocket, Crystal goes after Suicune himself...

The volume contains thirteen chapters, from "Slugging It Out With Slugma" to "Great Girafarig". Crystal goes from Violet City to Ecruteak City. 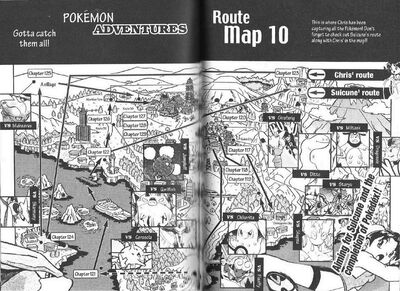 After getting defeated by Suicune, Crystal goes to train to become a better catcher, suggested by her mother. After improving herself in her own craft, she meets a fellow Pokédex Holder, Yellow, who has been seChapterhing for her. Suicune, as well as Raikou and Entei, go to find new masters to serve. Together, they go to Whirl Islands, but get swept in a whirlpool. Meanwhile, Lt. Surge, who has been defeated by the Masked Man, meets Morty and asks him to find a duo of boys who clashed with the Masked Man before.

The volume contains thirteen chapters, from "Suddenly Suicune I to "Really Remoraid". Crystal goes from Ecruteak City to Whirl Islands. 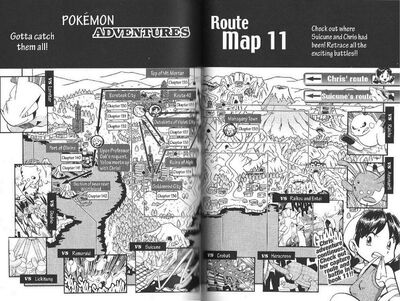 Gold and Silver wake up in a cave in Whirl Islands and obtain gear from Lt. Surge, who asks for info about the Masked Man. However, they get attacked by a giant Legendary Pokémon, Lugia and meet with Crystal. Together, their Pokémon evolve and manage to repel Lugia, who gets captured by an unknown person. While Gold and Crystal hurry up to the League for an event to uncover the Masked Man and Silver goes to finish his business, Suicune manages to find a new master.

The volume contains eleven chapters, from "Hello, Lickitung" to "Yikes, It's Yanma!". Crystal goes from Whirl Islands to Indigo Plateau. 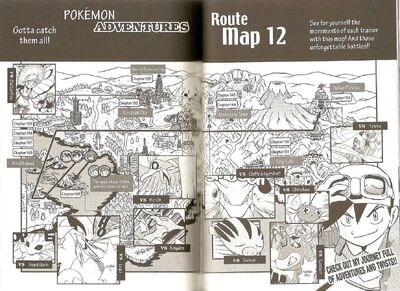 The Gym Leaders' tournament starts to have Gold and Crystal identify the Masked Man. During the League, however, Silver finds a friend of his, Green, who, worried about Silver's safety, teleports him away. Gold and Crystal find trouble in the control tower and realize Team Rocket infiltrated the system and have led the Gym Leaders into the monorail system. After defeating them, they arrive to the battle ground and see the Masked Man with two Legendary Pokémon he managed to catch.

The volume contains twelve chapters, from "Capital Kabutops" to "Lugia and Ho-Oh on the Loose, Part 2". Crystal stays in Indigo Plateau. 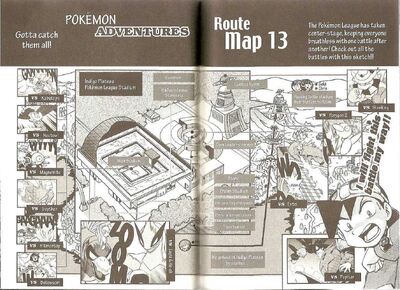 With the Indigo Plateau destroyed, Gold goes in pursuit of the Masked Man, who fights Blaine, Lt. Surge and Misty, as well as their new Pokémon: Suicune, Entei and Raikou. As Gold gives chase, Green goes to Ilex Forest and teams up with Silver to defeat old colleagues of theirs: Will and Karen. The Gym Leaders' train gets stopped by Red, who recovered from his injuries and joins with Blue to go to Ilex Forest. Bill fixes the transporting system and has all Pokémon defeat Ho-Oh and Lugia, who leave. Red, Green, Blue, Silver, Crystal and Yellow go towards the shrine and meet the Masked Man, whose identity was lifted by Gold: his name is Pryce. 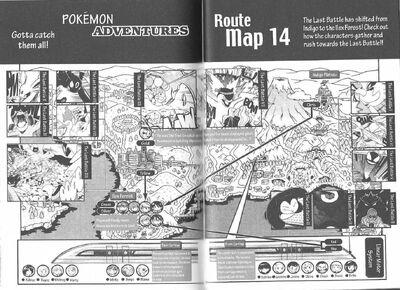 Pryce repels the attacks and travels through time, into the shrine, to have Celebi lead him to the time where his Lapras' lost its parents. Gold, who was trapped by Pryce in the shrine, is rescued by Crystal and Silver, who chase Pryce. Gold, aided by his new partner he hatched, Pibu, attacks Pryce. Pryce realizes the truth and the mistakes he made and makes a painful decision to rescue Gold from being trapped into time. After the ordeal, Gold goes to train with Red.

The volume contains eleven chapters, of which one is part of the Crystal Chapter, "The Last Battle XIV". Crystal stays in Ilex Forest. This is also the final volume of Crystal Chapter and the story continues in Ruby & Sapphire Chapter.