For the variant appearing in the games, see Crasher Wake.

Crasher Wake is a character appearing in Pokémon Adventures, who is the Gym Leader of Pastoria City in the Sinnoh region.

Crasher Wake is a middle-aged man, who has a patch of black hair and beard. He doesn't wear a shirt, but he wears orange/blue bracers and boots. His blue pants with orange outlines have black appendages on his legs, which resemble Swampert's appearance. He also wears a blue mask with white wings-like appendages. Crasher Wake is a very strong-built man.

Crasher Wake's philosophy is to have the strong people protect the weak ones. Due to that, he's viewed as a popular person in Pastoria City. Crasher Wake is also very cheerful, by whistling songs and making occasional jokes.

A long time ago, Palmer and Crasher Wake were friends, who often trained one another when they were children.[1] Crasher Wake was a famous pro-wrestler, who attended many matches in a TV show.[2]

Crasher Wake was an upstanding citizen of Pastoria City, who used the money from winning battles to invest in the town and Pastoria Great Marsh, to protect it. In his words, the strong should always protect the weak, which made him famous in the city.[3]

When Diamond, Pearl and Platinum came to Pastoria City, they went to the Gym, where they found Crasher Wake doing squats. Platinum admitted she wanted to challenge the Gym Leader, which pleased Crasher Wake. However, his sailors shielded his face, for he wasn't wearing his mask. Crasher Wake quickly put his mask on, and told he was "the torrential masked master, who neutralized everything that got in his way with 'water'". He declared he would accept Platinum's challenge, who went with the boys to Great Marsh to capture a Pokémon for the Gym Battle. While the trio was away, Crasher Wake, who removed his mask, was tidying the Gym up for the upcoming battle.[4] Eventually, Platinum returned to the Gym, but was quite muddy from the Great Marsh. She challenged Crasher Wake; the two chose two out of three Pokémon for the battle. Crasher Wake sent Floatzel, while Platinum her Empoleon. Crasher Wake was dazzled by her Empoleon, and much to others' surprise, he changed the rules so they could also use the water pool for the battle. Empoleon and Floatzel grasped and hit each other before diving into the pool.[3]

Despite Floatzel's superior speed, Empoleon used Vacuum Wave to defeat it. Crasher Wake was impressed, and sent Quagsire, who used Blizzard. Since Empoleon was exhausted from the last battle, she fell defeated. Thus, Platinum sent Torterra, whom Diamond lent to her. Quagsire and Tru grasped each other, but Quagsire managed to lift Tru and hurl it away. By accident, Platinum got caught by Tru's spikes and fell into the water. Crasher Wake and Quagsire looked to the water, which became muddy. However, Crasher Wake felt he could still detect Platinum, and have Quagsire finish them off with Blizzard. However, as the last bubble disappeared, Crasher Wake thought they were drowning, and sent his sailors to rescue the challengers. Much to his surprise, Platinum merely discarded her rubber suit, and appeared behind him with her Tru, allowing the latter to defeat Quagsire in an instant. Crasher Wake was in shock, while Platinum admitted she felt inspired by Crasher Wake's deeds and motives, and came straight from the swamp to battle him. Crasher Wake became embarrassed, and when Platinum asked him about the prize money, he told she didn't need to worry, as he didn't have to pay for himself. Hearing that Platinum ignored the fact and gave her best to defeat Crasher Wake, the latter was quite impressed, and awarded her with the Fen Badge. Noting she defeated the four Gym Leaders, Crasher Wake suggested her to take on the rest of the Gym Leaders, which she accepted.[5] Crasher Wake was warned by Byron about the enemy, Team Galactic, and went to Lake Valor to stop them.[2]

Crasher Wake came to Lake Valor, and encountered Rad Rickshaw and Pearl. Seeing that the lake had evaporated, he had his Quagsire and Floatzel refill the lake by using Rain Dance. Crasher Wake unveiled himself, which made Rad Rickshaw quite happy to see his wrestling idol. Crasher Wake was pleased, but noted that Byron warned him too late. Still, he picked Pearl up, and noted he fought alone, which changed his mind, as he believed him to be quite impatient. Crasher Wake noted that Pearl had fought bravely, which reminded him of Pearl's father.[2]

When Pearl woke up, he encountered Crasher Wake, who took him to Pastoria City's Gym. Crasher Wake was pleased that Pearl woke up, who was grateful that the man had rescued him. Crasher Wake smiled, claiming it was his duty to have rescued him and Rad Rickshaw. The two went outside, seeing that Floatzel and Quagsire were using Rain Dance to refill the lake. Crasher Wake stated his motto that the strong should protect the weak. Since he noted that Pearl was quite impatient, he believed he could do well with a Floatzel. Pearl assumed Crasher Wake was giving his Floatzel, but he denied. Instead, the two went to Route 213, where Pearl fought a bunch of Floatzel. Since he could not capture them, he attempted to catch a Buizel. Crasher Wake pointed out that the Pokémon were quite angry, as their lake had evaporated, and blamed humans for that mess. Pearl assumed it was because he was unable to stop the bomb. To cheer him up, Crasher Wake placed him at a billboard, showing his face on a Croagunk. Pearl laughed, and Crasher Wake mused that they should laugh in tough times to overcome them. Since Pearl was eager to fight the enemy, Crasher Wake proposed he could train Pearl over the night. Pearl accepted, and called Crasher Wake as his master.[6]

Crasher Wake monitored Pearl, and urged him to do better, who captured a Buizel. Crasher Wake was pleased, even if Pearl barely managed to capture it. However, Pearl's Buizel, Zeller, didn't want to accompany Pearl, to which Crasher Wake pointed out that they also had to do more training to have Pearl befriend Zeller. Pearl was up to the task, but was told he also needed at least two more Pokémon before confronting Team Galactic. Pearl was overwhelmed, since he barely caught the angry Zeller, under this harsh weather. Crasher Wake laughed, reminding this made the success even sweeter, and dared Pearl to show his willpower. The next morning, Crasher Wake noted that Pearl did manage to capture two Pokémon. Pearl went on Rayler, and Crasher Wake asked him what would he want as a reward. Pearl asked for a special song, which Crasher Wake promised to make. Suddenly, the group met up with Johanna, Sebastian and Roseanne, who reported that Diamond was in the air shuttle.[7]

Crasher Wake listened to Diamond's mother's story how Diamond came on the air shuttle, and went to Veilstone City. Pearl swore to find him, and believed he was okay. Crasher Wake noted Pearl's determination, and trusted him. In fact, the two trained all night, and Crasher Wake had taught Pearl everything he knew.[8] Candice, Maylene and Crasher Wake went through the underground tunnels to Mt. Coronet. There, they teamed up with Fantina, Roark and Gardenia against Team Galactic's commanders. The six Sinnoh Gym Leaders introduced themselves, which frustrated Team Galactic's commanders. Still, the trio decided to take them on, so Crasher Wake joined Gardenia to fight Mars.[9] Crasher Wake and the rest of the Gym Leaders defeated the Team Galactic commanders. They went to the stairs to reach Cyrus, but space and time was being warped, and prevented them from reaching him. Thus, Byron had the Gym Leaders go underground, where Professor Rowan gave them instructions on how to reach Cyrus. Thus, the Gym Leaders went through the tunnels and emerged from the ground where Cyrus was. Crasher Wake had his Quagsire damage the Red Chain, in hopes of destroying it. Cyrus sent his Pokémon to stop them, but the Pokémon endured, until the chain snapped. Cyrus held the destroyed Red Chain, and since he could no longer control Dialga and Palkia, he shouted at the Gym Leaders that he won't forgive them.[10]

With Cyrus defeated, the distortions of space and time stopped. With nothing else left, Diamond, Pearl and Platinum placed the Gym Leaders on their Pokémon, and went to take them to the hospital.[13]

Looker and Platinum remembered Crasher Wake, due to his powerful status, for he was connected to the rest of the Gym Leaders, as well as the Elite Four and Frontier Brains of Sinnoh region.[14]

After the conflict between Dialga and Palkia had ended, Crasher Wake was taken to the hospital, where he was recuperating. Diamond and Pearl visited him, and the former gave the latter a device from Crasher Wake. Pearl played the device, which played a song that Crasher Wake had recorded, to honor Pearl's wish.[15]

Crasher Wake and the rest of the Gym Leaders had recovered, and went to Byron, who awaited them with open arms.[16] 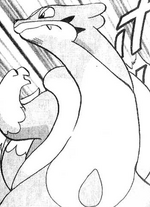 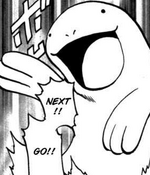 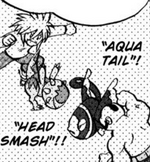