Crasher Wake serves as the Gym Leader at the Pastoria City Gym. Wake specializes in Water-type Pokémon, and holds the Fen Badge for the trainers that defeat him.

Crasher Wake is a middle-aged man, who has a patch of black hair and beard. He doesn't wear a shirt, but he wears orange/blue bracers and boots. His blue pants with orange outlines have black appendages on his legs, which resemble Swampert's appearance. He also wears a blue mask with white wings-like appendages. Crasher Wake is a very strong-built man.

Boisterous and dramatic, Crasher Wake is a very extroverted trainer of sorts. He is extremely adamant in his beliefs, going so far in his training to the point of enduring the raw power of a heavy waterfall to prove it. Despite not being a Fighting type specialist, Crasher Wake enjoys proving his muscle even in defeat.

Crasher Wake first appeared in the first Generation IV games. Wake's Gym is filled with switches where, if stepped on, will raise or lower the water level. Using these switches is the only way to reach Wake. Upon winning, the player will receive the Fen Badge, and TM55 (Brine).

He also he makes an cameo appearance in HG/SS, outside the Safari Zone, on one of the bridges, and in the Celadon Department Store, where he gives the player masks of the Sinnoh Starter Pokémon. 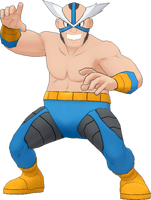 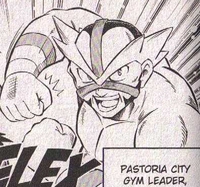