Craig Blair is an American voice actor in the Pokemon Anime series. He provided the voice of Pyramid King Brandon in Season 9. He also voiced Ivysaur in Super Smash Bros. Brawl. He left at the end of Season 12, allowing Ted Lewis and Mike Pollock to reprise their previously respective roles of Giovanni and Raoul Contesta. Mr. Sukizo would then be portrayed by Jimmy Zoppi. 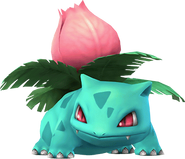 Add a photo to this gallery
Retrieved from "https://pokemon.fandom.com/wiki/Craig_Blair?oldid=1297474"
Community content is available under CC-BY-SA unless otherwise noted.