Crabrawler is a purple Coconut Crab Pokémon with blue crab claws that are shaped like boxing gloves.

A competitive Pokémon that hates to lose, this Pokémon uses its large claws as protection for its face and belly while it closes in on opponents. Crabrawler's pincers sometimes break off from overuse, but they grow back quickly. Crabrawler strives to achieve not only a high social standing, but a physically higher position as well. It can be found clinging to buildings or even tall people, and will punch anyone who attempts to remove it from its perch. In the event that it does lose, its mouth will foam before it faints.

While it is capable of splitting tree trunks, it usually punches trees to knock down ripe berries. Many Crabrawler will gather around a tree to compete for the ripe berries.  Crabrawler also preys on Exeggcute. It has been known to mistake Exeggutor for coconut trees, which shake and stomp Crabrawler off when climbed.

Crabrawler can have either Iron Fist or Hyper Cutter as an ability.

Crabrawler evolves into Crabominable when it is leveled up on top of Mount Lanakila.

Crabrawler is based on a coconut crab and a British gentleman boxer. Its single half-closed eye also makes it appear as though it has a black eye.

Crabrawler comes from crab and brawler. 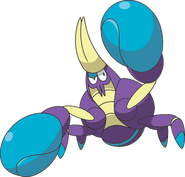 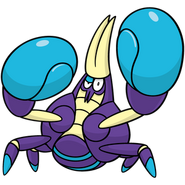 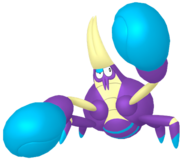