Crabominable sort a looks like a yeti crab, but instead of crab-like claws it has feet-like claws instead.

Crabominable is based on the Kiwaidae yeti crab or coconut crabs. It also appears to be a literal interpretation of a "yeti crab", bearing features of both crustaceans and the mythical Yeti (or Abominable Snowman).

Crabominable is a combination of crab and abominable, referring to the Abominable Snowman. 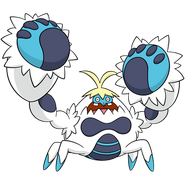 Add a photo to this gallery
← Crabrawler | Crabominable | Oricorio →
Retrieved from "https://pokemon.fandom.com/wiki/Crabominable?oldid=1384652"
Community content is available under CC-BY-SA unless otherwise noted.