For the variant appearing in the games, see Courtney.

Courtney is a character appearing in Pokémon Adventures, who is an admin of Team Magma.

Courtney is medium height and slim girl, with kiddy bob cut hair with a fringe. She wears a red hood with horns.

Courtney has black hair. Her hood has a black circle that stands between her black horns. She wears a red short-sleeved shirt, which has the Team Magma logo on it. She also has a grey skirt with a white line, some red leggings and black shoes, as well as red bracers with black gloves.

Courtney has lilac hair and wears a red hoodie with yellow horns, a red jacket with a red dress with the Team Magma emblem on it. She also wears heeled red boots with black kneecaps, as well black gloves with red fingers, supported by red bracers with yellow lines.

Courtney doesn't believe much in Team Magma's goals. Instead, she joined out of her own amusement. Still, Courtney doesn't hold back and makes threats to her opponents. Though Courtney participated in the Contests, she feels the fire she tries to burn through everything is the most beautiful thing in the world. Courtney is very often seen blowing bubbles with bubblegum.

While being a young girl, Courtney was friends with Daisy Oak. Courtney was also a Coordinator and participated in some Contests before joining Team Magma.[1]

One day, Courtney faced a spy, Zinnia and sent Ninetales to battle her. Zinnia dodged and claimed to have come to warn about an incoming disaster. Courtney did not listen to her, even if she knew Zinnia was a Draconid and attacked with her Ninetales. Maxie, however, let Zinnia fly off and explained to Courtney Zinnia told them the information about Groudon and the Red Orb.[2]

Courtney and Tabitha came on the Abandoned Ship to search for an item. Through a coil flip, Tabitha grudgingly went to search for the item. Courtney, however, was standing and sensed someone was watching her. She faced Sapphire and hit her eyes. Since her gloves were drenched in Tamato Berry's juice, Sapphire could not open her eyes, allowing Courtney to ler Ninetales burn Sapphire. However, Sapphire distracted Courtney and escaped away. While searching for Sapphire, Courtney encountered Tabitha and both reported about a girl and a boy on the ship. With the help of Plusle and Minun, Ruby and Sapphire attacked Tabitha and Courtney. After getting electrocuted, Tabitha and Courtney sent Torkoal and Ninetales to attack, the latter burning the Double Team illusions off. During the battle, Ruby managed to snatch the diary, in which the password for the Scanner was written. Just as Tabitha was to crush Plusle, Ruby threatened to throw the diary into the sea. Tabitha didn't believe him, but Ruby proved him by nearly throwing the diary. So, Courtney handed Plusle over, who got empowered by Minun and attacked Courtney and Tabitha. Courtney dropped the Scanner, which Ruby obtained and jumped off the ship with Sapphire. However, since Ruby only obtained the Scanner's case, Tabitha and Courtney flew off with their Swellow. Tabitha was glad they got the Scanner, but Courtney was angry about the boy they couldn't see and promised to finish him off.[3]

Tabitha and Courtney returned to the Team Magma headquarters and reported their success. Blaise joined them and the three were ordered by their boss, Maxie, to make some trouble. The trio came to Slateport City and saw Captain Stern hanging out with Ruby and two other people. Tabitha's Torkoal went in and emitted smoke, allowing the admins to take them away.[4] After waking up, Ruby noticed Blaise's logo on his shirt and realized Courtney and Tabitha he fought before also belonged to the same team. He realized those two did not recognize him, as he had his glasses on the ship, was in the shadow and his face was smudged as well.[5] Courtney came to the Team Magma Headquarters, where she told her leader she decided to pursue the "treasure" they sought after.[6]

She took some grunts and tried to crumble the Rusturf Tunnel. Instead, she faced a group and even recognized Ruby, whom she battled on the Abandoned Ship.[7] Courtney took Ruby away and glued her gloves with tree sap, thus preventing Ruby from escaping and slammed him on the wall. Courtney had her Ninetales attack and was unamused Ruby just dodged attacks. Fortunately for her, Ruby sent his Pokémon out to retaliate. Courtney knew only Ruby's Marshtomp, Mumu, could've withstood the flames. She also told the Team Magma admins' expertise: Tabitha was able to daze his enemies with smoke, Blaise could conjure illusions and Courtney could burn off everything to black crisps. She also knew Ruby admired beauty and asked him what he considered the most beautiful thing in the world. Courtney thought it was fire and kneeled to Ruby, asking him to join Team Magma.[8] An explosion blew Courtney away, as the Loudred and Exploud used Hyper Voice to blow away the rocks. Ruby, however, refused to join, so Courtney's Ninetales launched fire away at him. She claimed such heroism would cost his life and saw well he really couldn't belong to Team Magma. Ruby, however, had a thread from Mumu's sweater grasp Courtney's hand; as the car Mumu was on rode away, Ruby retreated, while Courtney was pulled into Ninetales' flames. Courtney, however, survived and contacted Blaise, passing her duty to find the Red Orb to him. Blaise accepted and knew she was after Ruby. Courtney confirmed that and asked him to pass the word to Maxie, since she would spend a lot of time to find him.[9] Gabby and Ty promised to Wanda and Riley to find more about the organization Courtney belonged to.[10]

After the Gym Leaders' meeting in Fortree City, Wallace, Roxanne and Brawly knew they would have to face against Team Magma admins.[11] Before arriving to Fallarbor Town, Ruby thought of Courtney's question of "what was the most beautiful thing to him". Ruby shook his head and tried to forget that.[10] Ruby, who thought of his past adventures and battles (including the one against Courtney), decided to leave the Gym Leaders at Fortree City.[12] Ruby also thought of his encounters with Courtney and gained courage to fight back against the villainous organizations.[13]

Courtney eventually attacked the scientists at Mossdeep Research Center.[14] She was contacted by Blaise and told him how Groudon was beautiful. Since there were certain individuals that wanted to stop Groudon, Courtney flew off to join Blaise and Tabitha to fight such people.[15] The three admins met up and faced Wallace, Brawly and Roxanne.[16] Courtney carried Roxanne to the Lilycove City's inn, where they started the battle.[17] Roxanne saw the explosion at the place Brawly was battling, but Courtney reminded her of the battle by having her Ninetales launch fire. Roxanne sent Cradily, whom Courtney noticed it ingrained itself. Just as Roxanne was pleased about her strategy, Courtney blasted a wall and saw three people, who were workers in game industry. Courtney threatened to kill them if Roxanne did not surrender. Roxanne grudgingly did so and let Courtney's Ninetales defeat her Nosepass, allowing Groudon to continue rampaging.[18] Courtney left Roxanne, who slammed her fist on the ground in frustration for failing in her task to stop Groudon.[19] Scott reported to Norman about the battles between Gym Leaders and Team Aqua and Magma admins.[20]

Courtney approached Ruby on the Mirage Island, who was furious to see her present. However, Courtney claimed she didn't came to battle him. She admitted she was present just when Tate and Liza detected a presence and believed to be Plusle and Minun. She knew Ruby would go with Sapphire to save Hoenn and proposed to join in, since she didn't care much about Team Magma anymore, since she only wanted to have her own amusement. She saw the power of Kyogre and Groudon and didn't want the destruction to spread throughout Hoenn. Courtney also reminded Ruby that Sapphire could fall victim to the power of the Blue Orb. Ruby imagined Sapphire possessed by the Orb and made the deal with Courtney.[21] Later, Courtney came to Ruby, who exited the Mirage Island and locked Sapphire in Wallace's aircar. Both Ruby and Courtney flew to Sootopolis City, determined to stop Groudon and Kyogre once and for all.[22] Just as Ruby wondered if it was okay to trap Sapphire in the aircar, Courtney ordered him to leave any second thoughts, since they needed to be prepared to face Groudon and Kyogre. However, she was envious how Ruby cared about Sapphire and took the Blue Orb to control Kyogre.[21]

Courtney and Ruby tried to get the Legendary Pokémon's attention, but failed. They had their Ninetales and Swampert attack Kyogre and Groudon, though Courtney noted how Ruby's training on Mirage Island improved his skills. Just then, Ruby's right arm and Courtney's left arm got changed by Orbs' powers. Just then, the two managed to stop Kyogre and Groudon from fighting. However, the Legendary Pokémon turned on them and attacked Courtney and Ruby. Courtney pushed Ruby away and got crushed by the rubble that fell on her. Ruby tried to help her, but failed, while Courtney felt the Orb didn't chose her as the host. Just then, Rayquaza arrived, which Courtney identified as the third Legendary Pokémon. She tried to tell Ruby who rode Rayquaza.[23] However, a tentacle pulled her into the Cave of Origin, which collapsed and crushed Courtney. Since she had little energy left, she pulled the Orb out of her body, making Ruby astounded how much spiritual strength she carried. Courtney gave the Blue Orb to Ruby, claiming it was time for the young ones to fight. Ruby cried, knowing Courtney also took part in Contests and wanted to help her. Before she got entirely crushed by the rubble, Courtney blew a balloon gum and placed the lighter inside for Ruby to examine. Amidst the rubble, Courtney wished Ruby would find out what sacrifices his father had made.[1]

Ruby saw through the memory lighter Courtney was doing research on him and his family. He thanked Courtney for considering to participate in Contests, and considered her a friend, even if he refused to join Team Magma.[24] While speaking to Norman, Ruby recalled how Courtney found out Norman's task was to find Rayquaza, since he admitted to have set Rayquaza loose.[25] Maxie and Archie appeared and admitted they were the ones that pulled Courtney towards the Cave of Origin, while she crumbled inside. They picked up the Red and Blue Orbs and intended on betraying their subordinates and crush them, including any authority to rule the world.[26] Courtney remained crushed under the rubble, while Ruby and Sapphire joined together to beat Maxie and Archie.[27]

After the crisis was over, Courtney was flying outside the airship. She decided to abandon her old life and became a gardener.[28]

A "new" Courtney, Shelly, Tabitha and Matt arrived to assist Zinnia. They admitted their names were *shared* by other people of Team Aqua and Magma, as those were just codenames they inherited from the old admins of Team Aqua and Magma. Just as Sapphire went to attack Zinnia, Courtney tried to stop her by having her Numel attack her, but failed. Later on, the Team Magma and Aqua admins watched as Zinnia battled Sapphire on the rocket.[29]

Matt, along with Team Aqua and Magma admins, were found at the Battle Frontier, where they were intimidated by the Frontier Brains.[30] 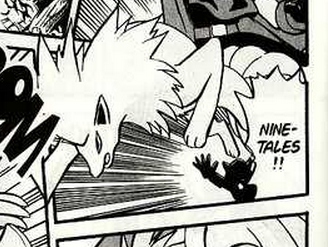 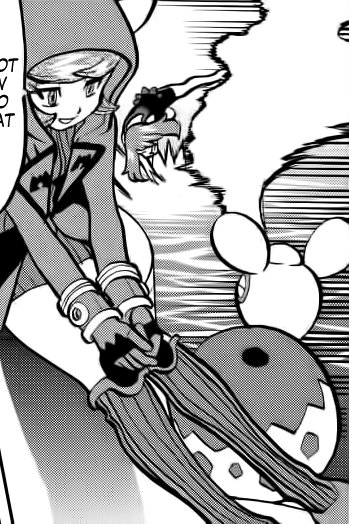 Courtney from the Ruby & Sapphire arc 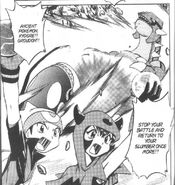 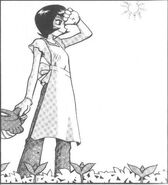 Courtney watering berries
Add a photo to this gallery

Retrieved from "https://pokemon.fandom.com/wiki/Courtney_(Adventures)?oldid=1314889"
Community content is available under CC-BY-SA unless otherwise noted.