Courtney is a Team Magma Admin in Ruby and Omega Ruby.

Courtney is a medium-height and slim girl, with kiddy bob cut hair with a fringe. She wears a red hood with horns.

Courtney has black hair. Her hood has a black circle that stands between her black horns. She wears a red short-sleeved shirt, which has the Team Magma logo on it. She also has a gray skirt with a white line, some red leg warmers and black shoes, as well as red bracers with black gloves.

Courtney has lilac hair and wears a red hoodie with yellow horns, a red jacket with a red dress with the Team Magma emblem on it. She also wears heeled red boots with black kneecaps, as well black gloves with red fingers, supported by red bracers with yellow lines.

Courtney, who in the past was a great scientist, has a brilliant and analytical mind. She doesn't speak very often and when she does, she often pauses during her sentences, indicating a possible speech impediment. She also has a habit of giggling childishly. She rarely shows interest in what is happening around her but when something, or someone, actually does gain her interest, she becomes obsessed and will pursue relentlessly.

Courtney is extremely devoted to Maxie but when he is defeated by the player, she becomes confused and upset by his decision to give up the plan they devoted their life to. Courtney takes matters into her own hands but her mental state starts to deteriorate until she finally suffers a mental break down.

Courtney holds herself like a child pretending to be an adult and uses her unique body language and poses to look more harmless than she really is. 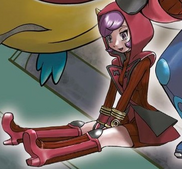 Courtney in the Delta Episode in Omega Ruby and Alpha Sapphire.