Count Pumpka is a character appearing in Pokémon the Series: XY and XYZ.

Count Pumpka was an owner of a castle. During the Gourgeist Festival, he and his Pumpkaboo, Prince Pumpkaboo saw Jessie's Pumpkaboo, causing the Prince to fall in love with her Pumpkaboo. Count Pumpka sent his butler to take Team Rocket into this castle. There, Count Pumpka asked Jessie to let Pumpkaboo stay with him and the Prince, but Jessie asked for her enemies' Pikachu in return. Count Pumpka sent his steward, who actually took Chespin, dressed as Pikachu. The heroes came to rescue Chespin, but were trapped in a cage. With the deal settled, Jessie traded her Pumpkaboo (who was angry at Jessie for leaving her so easily) for Count Pumpka's Mawile. However, Pumpkaboo evolved into a Gourgeist, causing the Prince Pumpkaboo to be heartbroken. The trade was reversed and when the Count found out Team Rocket was the one stealing Pokémon, the heroes blasted them off. Count, as a token of apology for the trouble he and his steward had caused, had the heroes have dinner at his castle. 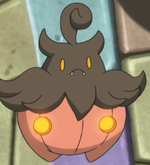