Cosmog resembles a floating cloud coloured in dark blue and purple. Two light-blue cloud-like formations stem upward from Cosmog's body and seem to be similar to a pair of arms. It has a gold crescent-shape around its body and its face is black with blue cheeks.

As seen in Lillie's Cosmog, Nebby, it appears to be a curious and playful Pokemon. It also is overly trusting and naive, carelessly approaching even people who may not have the best intentions.

In the anime, Nebby is shown to have traits similar to newborns as it tends to cry and sleep a lot. Nebby is also shown to be a picky eater and only seems to eat konipeto.

Under stress and pain, Cosmog can create Ultra Wormholes in an attempt to escape its tormentor(s).

Cosmog is based on a nebula.

Cosmog comes from cosmos and fog. It could also involve smog. 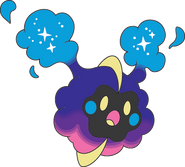 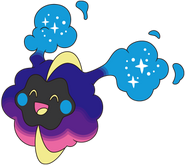 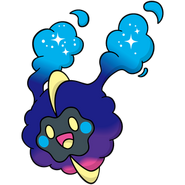 Add a photo to this gallery
← Tapu Fini | Cosmog | Cosmoem →
Retrieved from "https://pokemon.fandom.com/wiki/Cosmog?oldid=1178027"
Community content is available under CC-BY-SA unless otherwise noted.