Cosmoem (コスモウム, Kosumoumu) is a Psychic-type Legendary Pokémon introduced in Generation VII. It is the evolved form of Cosmog and the pre-evolved form of Solgaleo (in Sun and Sword) and Lunala (in Moon and Shield).

Cosmoem looks like an eye from outer space. It has a black 'pupil' with curves that look like resting eyes, and various pink and blue stripes across it. Around it, there is a dark purple, reflective, translucent shell with stars in it. Around this shell, along the sides and top of Cosmoem's body, is a gold outline, with smaller, similar shapes partly closing around the main body.

It stays immobile in this entire stage, which makes the chances smaller for this Pokémon to evolve early.

Cosmoem is the evolved form of Cosmog. It evolves into Solgaleo (Sun, Ultra Sun and Sword) or Lunala (Moon, Ultra Moon and Shield) at level 53.

Cosmoem is based on a protostar. Its immense weight, despite its minuscule size, may be a reference to incredibly dense neutron stars. Its appearance may also be inspired by an eye, as well as an egg. Its shell also appears similar to a sun and a moon, possibly referencing its evolution into either Solgaleo, a Pokémon associated with the Sun, or Lunala, a Pokémon associated with the Moon.

Cosmoem comes from cosmo and embryo or ovum (egg).

Its Japanese name, Kosumōmu, likely comes from cosmic, womb, SuMo (the abbreviation of Sun and Moon), mom, and ovum. 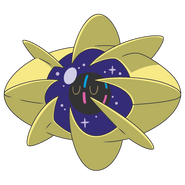 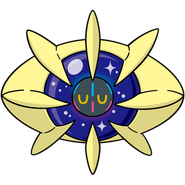 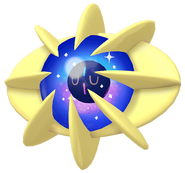