Corvisquire (アオガラス, Aogarasu) is a flying-type introduced in Generation VIII. It evolves from Rookidee starting at level 18 and into Corviknight from level 38.

Corvisquire is an avian Pokémon slightly resembling a crow or jay. Its head is black with a blue marking running from the top of the beak down to the back, while black feather "crests" go over its eyes and black feathers surround its face down to the bottom of its neck. Its eyes are similar to Rookidee's, but smaller, with the white marking forming the top of its long, gray beak. Its body is a slightly lighter blue than the rest of its blue feather. Its wings share a similar color scheme to its head, with its flight feathers black while its covert feathers are blue. Its tail is blue, and its legs and three-toed feet are gray with black claws.

Corvisquire are intelligent, shown by their ability to use tools to assist them in battle. They can accurately judge an opponent's strength in order to discern whether it is worth it to challenge the opponent or not.

Corvisquire is likely based on a corvid of some kind, most likely a raven. Its coloration suggests that it is based on the Steller's jay.

Corvisquire is a combination of corvid (crows and ravens) and squire. 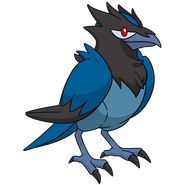 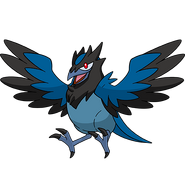 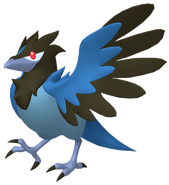