Corviknight (アーマーガア, Aamaagaa) is a Flying/Steel-type Pokémon introduced in Generation VIII. It also has a Gigantamax form.

Corviknight resembles a large, dark blue, armored raven or crow. The "mask" on its face in its previous forms now resembles a helmet, with peaks on the top and extending over its beak. The lower half of its beak is dark gray. The white markings beneath its eyes are now black, but its eyes remain small and red. Its neck is covered in dark blue armor at the back but has thick feathers in front, while its belly and covert feathers are armored. Its upper legs and four-toed talons are also armored, while its lower legs are dark gray.

In its Gigantamax form, its main difference from its previous form is that it is bigger. However, under its wings are red markings. Corviknight is now accompanied by what appears to be 4 red bird-like objects that help it attack. Like all Gigantamax Pokémon, Corviknight also has red clouds above its head.

Often being seen fearlessly soaring through the air, Corviknight is regarded as the strongest Pokémon living in the skies of the Galar region. With just a sharp glare and cry from this fearsome Pokémon, any Pokémon which are foolish enough to challenge them are sent cowering in tremendous fear.

Corviknight are also intelligent creatures, capable of using tools and solving problems through intuition. These taciturn Pokémon are always keenly observing their surroundings. Corviknight in fact pay attention to the body language of passerby in order to determine whether they intend to cause trouble before they even pick a fight. In some regions such as Galar, they are employed as taxi Pokémon because of their directional intuition and their stamina. Because of their reputation, Corviknight are commonly used as emblems to represent intellect and power.

Corviknight possesses superb flying skills and high intelligence, which can be helpful for transportation purposes.

It evolves from Corvisquire starting at level 38 and is the final form of Rookidee.

Corviknight's first major role is on the web-series Pokémon: Twilight Wings, as one of the two titular recurring characters alongside its trainer, a Taxi Driver.

Corviknight is based on a raven or crow and a knight, most specifically a Black Knight. Its feathers are similar to armor with its head resembling a helmet. It could also be based on the "black bird" sprite that appears in the previous games when the Fly HM is used.

Corviknight comes from corvid and knight.

Its Japanese name, Āmāgā, comes from a (raven), armor and gaagaa (Japanese onomatopoeia for a crow squawking). 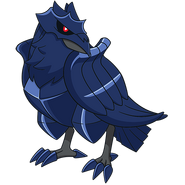 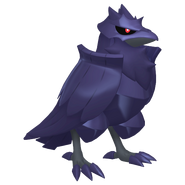 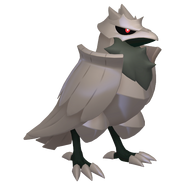 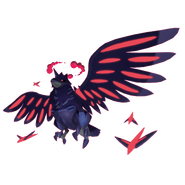