Corsola is composed of a pink and white, coral-like substance. It has a small face with a smile and a white underbelly. In addition to the coral outgrowths (also described as branches) situated all over the upper half of its body, Corsola also has a growth like a horn on its head, and that is considered its natural armament when facing underwater predators.

Galarian Corsola is overall white and has a grey underbelly. It also has red eyes, and it now has a frown rather than a smile.

Corsola has the ability Hustle which its shares with six other Pokémon. Its second ability is Natural Cure. Due to its appearance, it seems that Corsola could easily disguise itself as a rock or coral to avoid being eaten/attacked.

The branches serve to supply Corsola with nutrients by absorbing them from wherever there is clean water. The branches are amazingly expendable; if any branch breaks off, Corsola can grow it back over the period of one night (compare with Staryu). However, this fragility is undermined by Corsola’s inability to live in polluted water. If the sea is polluted, Corsola’s branches become discolored and soon crumble away, where soon after the Pokémon will die.

This Pokémon does not evolve.

In the Pokémon anime, Misty caught a Corsola in the episode A Corsola Caper, and has owned it ever since. It almost immediately became Misty's primary battling Pokémon, displaying surprisingly strong offensive abilities (in one case, knocking out a Gyarados with a single attack) in addition to the defensive power for which the species is best known. 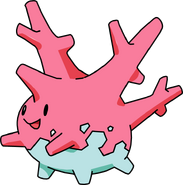 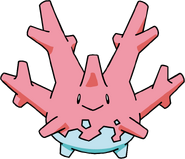 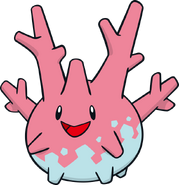 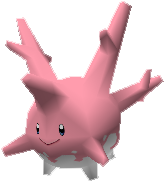 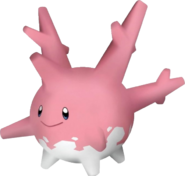 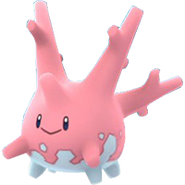 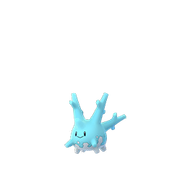 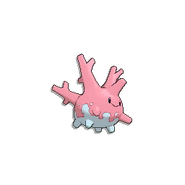 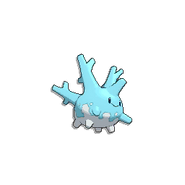 Corsola is based on a coral.

Galarian Corsola is based on the white bleached coral, which are the ones that are dying due to global warming side effects.

Corsola comes from coral, sole (a piece of coral), and solar.