Copperajah (ダイオウドウ Daioudou) is a steel-type introduced in Generation VIII. It can also Gigantamax into Gigantamax Copperajah.

Copperajah lives in a large herd, having migrated from a different region long ago. Its trunk boasts enormous strength, capable of pulverizing a large boulder into dust. In addition, Copperajah's green skin is water resistant.

When it Gigantamaxes, Copperajah is able to use the stored energy within its trunk to release enough power to level mountains and alter the landscape. That power can also destroy large structures in one blow.

It evolves from Cufant at level 34.

Copperajah's design is based on an Indian elephant and copper. Its tusks resemble bars of steel. Significant to its Indian based origin design, copperware is known to be historically prominent in India as both a mallable and accessible material for craft goods, to help store food and water safely as its properties help kill off bacteria, and valued in medicinal ayurveda tradition. Appropriately, copper is also known to be used in the construction of statues of Hindu gods as well. Its trunk seems to resemble some kind of holding or digging device, possibly a backhoe or excavator scoop. It may also be based on common depictions of elephants in Indian art. The Indian influence in its design despite being from the Britain-based Galar is due to British colonial influence in India. Its species, Copperderm, is a reference to the term pachyderm, an obsolete classification of mammals that included elephants, rhinoceroses, hippopotami, and tapirs. The term is still sometimes used today to refer to a mammal with thick skin, but it's used as merely a description of the animal rather than as a proper biological classification.

Its Gigantamax form resembles a steam roller, bucket-wheel excavator, and/or a tank. Its tall, rectangular, bipedal form also resembles a Whomp, an enemy from the Mario series based on the Nurikabe from Japanese mythology.

Copperajah comes from the words "copper" and "Maharajah" (a ruler of India). It may also come from word gajah (Malay language for elephant). 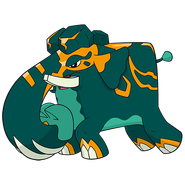 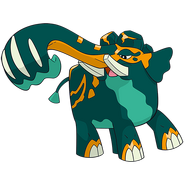 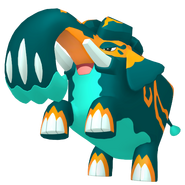 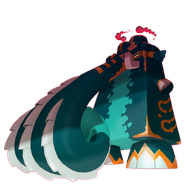