After they pick up flowers, Comfey use them to make garlands. When they have a favorable impression on a person, they will give one of their garlands to him or her.

On occasions, two of them or more can get tangled up with each other when sleeping side by side mentioned in SM046.

Comfey is based on a magical flower garland, specifically a lei, a common garland in Hawaiian culture that is often decorated with beautiful flowers. In modern day, leis are often given as gifts as a sign of peace and friendship, possibly tying in to Comfey's healing properties.

Comfey comes from comfy, lei, comfrey (a genus of flowering plants) and fey (another name for fairies, possibly being the inspiration for its Fairy-type).

Its Japanese name, Cuwawa, is a combination of cure, 輪 wa (ring), and フラワー furawā (flower). 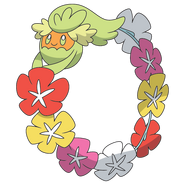 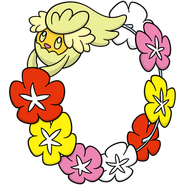 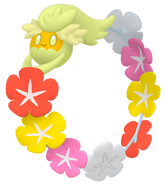 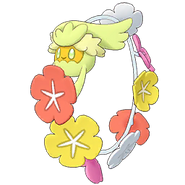 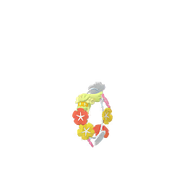