Colress is a character appearing in Pokémon: BW Adventures in Unova and Beyond, who is a scientist of Team Plasma.

This section, or a part of it, has been transcluded from Colress; any changes involving it should be made there instead. /

Colress is a man with blonde hair and wears a blue cowlick around his head. He has yellow eyes and wears glasses. He wears a long white lab coat, a pair of white gloves and a black uniform with blue outlines. He also wears black shoes.

Unlike his nicer game counterpart, Colress can be seen as a sadistic mad scientist, who uses the power of his machine to manipulate Pokémon. He wants to "bring out a Pokémon's true power", which he believes is their anger.

Colress was conducting experiments with wild Pokémon in an attempt to bring out their true strength. From his base in an abandoned observatory outside of Floccesy Town, he used a large machine to generate electromagnetic (EM) waves that resonated with small devices on the wild Pokémon's foreheads, increasing their aggression and attack power while also rendering them subservient to Team Plasma's commands. Unfortunately for the villains, the mind-control device's EM waves also leaked into the surrounding wilderness, driving the local Pokémon to attack Floccesy Town and revealing their presence in the area. Ghetsis contacted Colress, who assured him the experiment was doing well and they'd soon control the Unova region. When Ash, his friends, and Looker arrived in the observatory, Colress released his mind-controlled Pokémon on them to test their strength. Impressed by their Pokémon's ability to match his brainwashed Pokémon, he planted one of his controlling devices on Pikachu, forcing him to fight his master. Ash tried to reason with Pikachu, though Colress clarified the Pokémon couldn't hear him. However, Ash's encouragement allowed Pikachu to fight against the EM waves, eventually causing the device to break and freeing Pikachu, much to Colress' amazement. Before he could gather further data, Team Rocket showed up, using one of their miniature robots to steal Colress's research data from his computer before quickly reciting their motto and making an escape with their balloon. With the mind-controlled Pokémon freed, Colress and the Team Plasma Grunts he had with him retreated, destroying the observatory with a self-destruct mechanism to get rid of all possible evidence.[1]

Colress managed to upgrade his Pokémon-controlling machine with his remaining research data. Ghetsis watched Colress from a monitor as Colress tested the machine on a Scolipede. Instead of emitting radio waves to activate separate receivers on its targets, the machine now fired a narrow energy beam which instantly brought any Pokémon it hit under Team Plasma's control. Using this machine, Colress took control of a Haxorus, which he sent rampaging in a city. When Ash and his friends arrived and sent their Pokémon to stop Haxorus, Colress used his machine to take control of Iris' Dragonite, giving the heroes a lot more trouble to deal with. N demanded the purpose of all this and Colress replied he only brought the Pokémon's true potential out. Suddenly, Team Rocket appeared, attempting to steal Colress's machine. A battle between Jessie and James's Woobat and Amoonguss and Aldith's Liepard then took place, during which one of Liepard's Shadow Balls accidentally hit the machine, breaking it and freeing Haxorus and Dragonite from his control. Realizing that they were at a disadvantage, Colress and Team Plasma grunts retreated. Still, Colress was certain the machine was fully operable.[2] Colress and Aldith contacted Ghetsis on a videophone call. Colress was curious as to why Ghetsis wanted to capture N so badly. Ghetsis claimed Colress should not question orders, though Colress pointed out he was close to finishing his experiment and Ghetsis would be able to use the machine to fulfill Team Plasma's goal.[3]

As Colress was conducting his final experiments, Team Rocket invaded his newest laboratory and drew his security - consisting of Aldith, Barret and some other Plasma Grunts - into a trap in the woods. Once Colress was alone, Meowth approached him, so Colress knew Meowth's partners were just decoys to steal the machine. Meowth attempted to convince Colress to join Team Rocket, though Colress laughed. Meowth believed Colress did not actually like working for Team Plasma, claiming in Team Rocket organization Colress would've had some independence in the research. Colress replied he actually needed Meowth for an experiment, who accepted the offer. Meowth was hit by a beam and tried to recall his undergone training to resist the mind control device. However, Colress still managed to take control of Meowth. Jessie and James returned, praising Colress, whose machine would allow them to conquer Unova. After Team Plasma arrived, Colress admitted he was never dissatisfied by working with Team Plasma and ordered Meowth to attack Jessie and James. Meowth managed to even create a cyclone by using Fury Swipes, amazing Colress how much "potential" has been brought out of Meowth. Using Frillish and Amoonguss, Jessie and James managed to snap Meowth out of mind control before escaping. Later, Colress was seen with his Grunts reporting to Ghetsis, who revealed information about the Light Stone to them.[4]

Before arriving to the White Ruins, Ghetsis contacted Aldith and Colress, reminding the latter about Reshiram. Colress appeared with the rest of Team Plasma to commence their operation at the White Ruins. While Aldith, Barret and many other Grunts ambushed the workers at the site, Colress used his perfected machine to seize control of the workers' Pokémon and turn them on their Trainers.[5] Colress, seeing Iris and Cilan had their Pokémon battling Team Plasma's forces, fired a beam to control their Dragonite and Crustle. Fortunately, Iris and Cilan called the Pokémon back before the beam struck their Pokémon. One Ash and N came out of the maze, Colress managed to take control of Pikachu again, who started attacking Ash. Ash fell down from taking too much electricity, forcing N to surrender the Light Stone to Team Plasma in exchange for Ash's safety. Just then, Colress and the Team Plasma forces welcomed their lord, Ghetsis.[6]

Once N's sisters arrived, Colress took control of their Gardevoir and Gothitelle. Once Ghetsis summoned Reshiram, Colress took control of it. This pleased Colress, who felt Reshiram's true power could've been awakened. When Ash and Pikachu tried to stop him, he used his machine on Pikachu, though Team Rocket's Meowth stood in his way, since Team Rocket helped in the crisis. Everyone went to destroy Colress' machine, though Colress managed to take control of Pikachu. However, this time Pikachu was able to fight against its control, shocking Colress. Pikachu started attacking Reshiram to snap it out of the mind control; Colress tried to use the machine on Pikachu, but with no effect, shocking Colress and Ghetsis. Together with Reshiram, Pikachu destroyed Colress's machine once and for all, thus freeing the controlled Pokémon. Seeing everything was over, Colress tried to escape with Ghetsis, but was encased by Dragonite's Ice Beam, Crustle's Rock Slide and Krokorok's Stone Edge. Later Colress and the other Team Plasma members were arrested by Looker, thus disbanding the organization. As Officer Jenny took Team Plasma into custody, Colress mentioned his next project will be a device that allows Pokémon to communicate with people.[7] 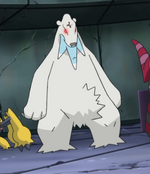 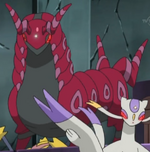 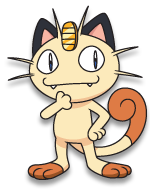 Colress with a Plasma grunt