Colress is a boss of Team Plasma, debuting in Black 2 and White 2. He researches Pokémon strength and is experimenting on something to do with the dormant abilities of Pokémon.

Colress is a man with blonde hair and wears a blue cowlick around his head. He has yellow eyes and wears glasses.

He wears a long white lab coat, a pair of white gloves and a black uniform with blue outlines. He also wears black shoes.

He wears a gray lab trench coat with tech panels and technologically advanced gloves, as well as black pants and black boots with gray accents.

Colress is a scientist who aims to unlock the full potential of Pokémon, regardless of the cost. For this reason, he chooses to side with Team Plasma and assist them with their plans as long as his research remains unimpeded. Despite his allegiances, Colress openly disagrees with Plasma's ideologies and greatly dislikes Ghetsis, though his opinions on the other Sages is unknown. Throughout the games, Colress is depicted as genuinely helpful and friendly, regarding the player character as a worthy opponent and acquaintance. He is excitable and passionate about his research and battling, and will repeatedly ask the player character for rematches if visited during the postgame. Despite this, he is said to be mysterious and difficult to read.

His name comes from "colorless".

His Japanese name is derived from "achromatic".

Colress is again seen in the Pokémon World Tournament in Driftveil City. He is the final opponent.

When the player character enters Ghetsis's chamber, he reveals that Colress is the boss of Team Plasma. He rants about his defeat.

Years prior, Colress had been seen in Kalos, after a Backpacker from Route 10 speaks of him asking about the rock pillars on the route.

Like Sun and Moon, Colress also stays in the Alola region, though his role is expanded. The player character can first encounter him in Tide Song Hotel, though he is seen to be engrossed in talking to himself and therefore doesn't notice the player character. He is revealed to be an acquaintance of the Ultra Recon Squad that they have reached out to ask for help. He has invented the N-Solarizer and the N-Lunarizer based on his experience with Kyurem which is a fusion Pokémon in response to their request. After witnessing Necrozma's capture in the player character's hands on Mount Lanakila, he gives both devices to them.

During the Team Rainbow Rocket incident, Wicke contacts Colress and asks him to enlist the player character and Lillie, who are trying to defeat the bosses of the evil organisation, by transporting the bosses back to their respective universes. He doesn't reveal his presence to Lillie and the player character due to using an invisibility device, and only reveals himself to help the player character save Lillie when Ghetsis holds Lillie hostage. He still opposes Ghetsis' goals and declares his hatred to his former boss although he knows that the Ghetsis in front of him is only a counterpart, before dispatching Ghetsis with a prototype device named "Colress Machine No. 1102", allowing the player character and Lillie to work their way up to rescue Lusamine and defeat Giovanni while he works to figure out a way to untangle the dimensions that are tangled to create the castle of Team Rainbow Rocket and restore the mansion back to normal. He successfully manages to revert and restore the mansion by the time the player character defeats Giovanni.

Colress in Pokémon the Series (anime) 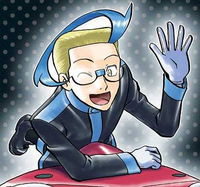 Colress in the Black 2 and White 2 trailer (anime)

Colress' VS sprite in Sun & Moon

Colress at the beginning of the game

The player character and Colress in Castelia City.

The player character and Colress

Colress aboard the Plasma Frigate.

Colress in Pokémon Sun and Moon
Community content is available under CC-BY-SA unless otherwise noted.
Advertisement