Cofagrigus is a gold-plated sarcophagus-like Pokémon with a blue trimmed headpiece. It has intimidating, slanted red eyes, and a malevolent grin with numerous sharp teeth. Four long, shadowy arms stretch out of the side of its body. The mask it held as a Yamask is now moved to the center of its forehead.

It is said that anyone that strays too close to a Cofagrigus will be transformed into a mummy. Gold pieces are Cofagrigus's favorite food. Because of its uncanny likeness of a sarcophagus, Cofagrigus has trapped many grave robbers that foolishly tried to steal it.

Cofagrigus's entire body is made out of gold. Its remembrance of being human is forgotten and has been told by many people to this day. Many ancient tombs have been decorated with Cofagrigus, which also has been a symbol of wealth from many past kings.

Cofagrigus is the evolved form of Yamask as of level 34.

In PokéPark 2: Wonders Beyond, a Cofagrigus appears as the first boss character in the game. He is first seen outside of the first attraction, but when Pikachu beats it, one of the elemental monkeys informs Pikachu about Cofagrigus' cakes. Before Pikachu can deal with him, two large arms attempt to ensnare Pikachu, Piplup and Oshawott in their grasp. However, only Oshawott and Pikachu escape, as Piplup would suffer a most terrible fate.

After Darkrai is defeated, Cofagrigus is seen again getting sucked into a large void along with the rest of Wish Park.

After Darkrai is revived along with Wish Park, Cofagrigus will be at his attraction, unlockable as a friend if you battle him.

Cofagrigus is based off a haunted Egyptian sarcophagus and a mummy. Its ability to turn robbers into mummies is similar to "The Curse Of The Mummy" and grave robbers.

Cofagrigus's English name seems to be derived from "sarcophagus" and "coffin". 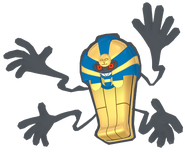 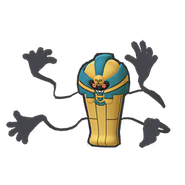