Cocoa is a character appearing in Pokémon: DP Battle Dimension. She is a famous Pokémon Stylist from Hearthome City.

Lady Cocoa enters the Hearthome Collection Contest fashion show alongside Dawn, Ash, and Jessilina. She also appears to be conceited and somewhat of a snob. For example, she yells at Dawn's Buneary because the latter wanted to touch her dress. She also made fun of her and Dawn for no discernible reason.

During the competition, Cocoa put on a show with her Mismagius. However, Hermione, one of the judges, was not impressed, due to Cocoa's focus on clothing and accessories. Cocoa nonetheless made it into the top three, along with Ash and Dawn. Much to her dislike, she ended up in second place, while Dawn won the prize. 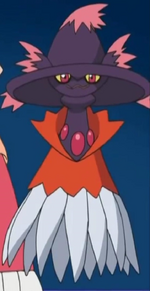