Cobalion (Japanese: コバルオン Kobaruon) is a Steel/Fighting-type Legendary Pokémon introduced in Generation V. It also one of the legendary quartet Swords of Justice, along with Terrakion, Virizion and Keldeo.

Cobalion is a goat-like Pokémon that is mainly aqua blue with eight black dots on it (four on each side). It has a light blue spiky tail and a white scruff of fluffy white fur covering its neck. Its feet are light blue with black tipped toes and a black line separating it from the aqua blue color. Its face is light blue and the top of its head is black while the rest of the head is aqua blue. It has orange eyes and two slightly jagged orange horns on the top of its head. It has orange spiked protrusions coming of its shoulders, and its rear thighs are relatively plump.

Cobalion is able to cause an unruly Pokémon to submit by simply glaring at them. It is also worth noting that they have bodies of steel and string resolves.

Cobalion has a calm and collected demeanour, while it also has a slight hatred of humans(having fought them in the past).

Cobalion does not evolve.

Cobalion appears here as the leader of the Swords of Justice, alongside his comrades Terrakion and Virizion and their student Keldeo. Unfortunately, their pupil chooses to challenge Kyurem to prove himself before he is ready.

Cobalion is likely based on a mountain goat. Cobalion along with Keldeo, Terrakion and Virizion seem to be inspired by the Three Musketeers. Cobalion likely represents the character Athos from the novel The Three Musketeers, being the eldest and the leader of the group.

Cobalion might be a combination of the words "cobalt" (a type of metal that's part of a blue pigment, alluding to Cobalion's Steel-typing and blue color) and "champion." 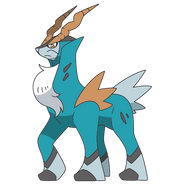 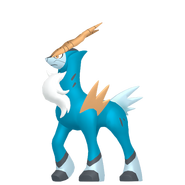 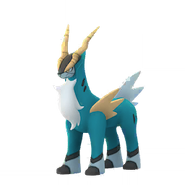