Coalossal is a large, bipedal Pokémon. Its entire body is covered with a rock-like material. It has three fingers and toes at each of its stubby arms and feet. A pile of rocks resembling a volcano with flowing lava erects on its back.It has spiked elbows and a head resembling a cow catcher on a train. It has 2 sharply angled eyes with black pupils that turn red when attacking.

Its Gigantamax form is noticeably bigger with the 3 red clouds swirling overhead. Its body now has 3 spots resembling a stone oven and its eyes are now permanently red.

While a peaceful Pokémon, Coalossal is very protective of the mines it inhabits and will not tolerate anyone who damages them. If it sees anyone who would do such actions, Coalossal will incinerate the offenders with intense flames that can reach over 2,700 degrees Fahrenheit.they are exclusively herbivores and lithovores, consuming plant matter and minerals and compressing it within their bodies into hard anthracite.The anthracite that Coalossal produce is valued for its high quality and ease of harvest. However, because Coalossal must eat more in order to produce this high-grade mineral, it is generally not as cost-efficient as harvesting the coal that Carkol produces. Coalossal anthracite still has its uses in applications where high quality is necessary, though.

During battle, Coalossal releases sparks from its coal heap that can scorch the surrounding areas.

Once it Gigantamaxes, Coalossal is capable of generating flames that can burn more than 3,600 degrees Fahrenheit; the flames themselves are fueled by Gigantamax energy. During a terrible snowstorm, Gigantamax Coalossal helped save the many lives of people living in Galar by providing warmth.

In line with its coal theme, it has access to Flame Body and Flash Fire (its hidden ability). Like its pre-evolved forms, it has the signature Steam Engine ability which boosts its speed drastically when hit by a fire or water Attack.

Coalossal has its own signature move in the form of Tar Shot, which makes its target weaker to Fire upon its first use and lowers its speed.

Gigantamax Coalossal is based on a stove oven or furnace while also resembling a mountain.

Coalossal is a combination of "coal" and "colossal". 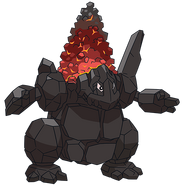 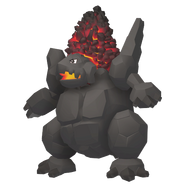 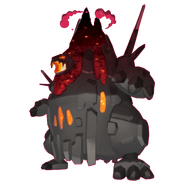