Clobbopus is a small Pokémon that resembles an octopus. It has sandy white skin, blue eyes, and orange markings. Two of its tentacles have orange suckers and purple tips, making them resemble boxing gloves.

Clobbopus are very curious Pokémon. However, their means of learning about the world is to punch things. Additionally, unlike many other Pokémon which are often far smarter than they appear, Clobbopus are only about as smart as a three-year-old, which may be an explanation for some of their behavioral patterns.

The Pokémon's tentacles are fragile and can be easily torn off, but they can regenerate.

They usually live in underwater, but they come up on land to search for food, similarly to Poliwhirl and Wooper.

Their main food are likely Poliwhirl and Wooper.

It evolves into Grapploct when it levels up after learning the move Taunt.

Clobbopus is based on an octopus and a boxer. This connection may have been made due to octopuses ability to "punch" prey with their tentacles during hunts, usually as a form of stunning small prey such as fish.

Clobbopus comes from clobber and octopus.

Tatakko comes from 戦い (tatakai, Japanese for "fight"), "attack," 蛸 (tako, Japanese for "octopus"), and possibly “K.O.” (short for knock-out, commonly used in fighting sports such as wrestling or boxing). 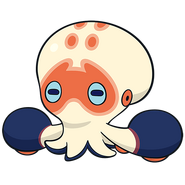 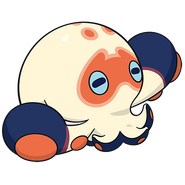