Clemont's Got a Secret!
This Magneton is one of Clemont's Pokémon who is living in the Lumiose City Gym. It is an Electric/Steel-type.

Magneton is another of Clemont's Pokémon who served as a patrol to the Gym while Clembot was in control of it. After attacking the group with Metal Sound, Fennekin battled it. It easily dodged Fennekin's Ember by temporarily separating itself into three Magnemite but was stopped by Froakie's Frubbles.[1]

When Clemont returned to Lumiose City to train for his gym battle against Ash, Magneton was used in a practice battle against Clemont's Bunnelby, which lost after Bunnelby mastered a new move.[2]

After the gym battle, Clemont gave Magneton back to Clembot so he can continue his journey with Ash.[3]

Magneton was used by Clembot to participate in a Gym Battle against Alvin. It went up against Vivillon. After the former use Rain Dance to wash away the latter's Sleep Powder, it use Thunder to defeat the Scale Pokémon. Magneton also battled against Pyroar and won once again by using Thunder. However, it was defeated by Cubone.[4] 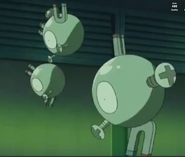