This Bunnelby is a Normal-type Pokémon and the first one Clemont is known to have.

When Bunnelby performed an act of kindness to Serena's Eevee in the episode A Frolicking Find in the Flowers in the form of letting Eevee sneak off with a PokéPuff and to Chespin's dismay, letting him take the blame, Serena's Eevee began to trust Bunnelby, and at the end of the episode, revealed that it was Bunnelby who she was most comfortable with. Ever since then, Bunnelby has had a love story with Eevee (who later evolved into Sylveon).

Like Snivy, Boldore and Greninja, Bunnelby is also a risk taker when he saves Bonnie from falling into a cliff. But at the cost of his heavily injured knee causing Clemont and the others to find the medicinal flower as he was treated at the Pokémon Center.

Clemont caught Bunnelby before he and Bonnie met Ash and Serena, where it was ordered by a Diggersby, a leader of a group of Pokémon, and when they found the problem, they all worked together to get out the subway. After he caught Bunnelby and releases it Clemont emotionally cries in happiness.

Bunnelby was used by Clemont in his first battle against Ash and Pikachu. Bunnelby was shown to be a strong battler, easily dominating the first part of the battle until it made the mistake of clamping Pikachu's tail with its ears. Pikachu responded with an Electro Ball, which dealt Bunnelby a lot of damage. Before the battle could continue from there, Team Rocket attacked and tried to capture Pikachu and Bunnelby. Clemont had Bunnelby using Mud Shot against Wobbuffet so Pikachu could attack with Electro Ball. However, Wobbuffet managed to dodge Bunnelby's attack. After Froakie appeared and stopped Wobbuffet with its bubbles, Bunnelby used Dig to propel Team Rocket into the air so Pikachu and Froakie could send them blasting off with Thunderbolt and Water Pulse respectively.

Clembot, also the Gym Leader Clemont built, made a deal with Clemont: If Bunnelby defeated Heliolisk, Clemont can reset the robot. When Bunnelby was utilized, it was being knocked around by Heliolisk's Bulldoze & Parabolic Charge attacks. At the end, Bunnelby won the battle with Dig and Mud Shot.

Bunnelby was used in a practice double battle with Chespin against Ash's Froakie and Ash's newly-captured Hawlucha. During the battle, Froakie and Hawlucha got into an argument with each other. Although Bunnelby and Chespin got the upper hand, Froakie used its speed to confused them both and defeated them single-handedly.

When Clemont returned to Lumiose City to train for his gym battle against Ash, Bunnelby was used in a practice battle against Clemont's Magneton, which it won after mastering a mysterious new move.

Bunnelby was used as the first Pokémon Clemont chose in the gym battle against Ash. But just like on the day Ash met Clemont, Bunnelby battled against Ash's Pikachu. During the battle, Bunnelby revealed to have learned Wild Charge, but despite putting up a good fight, Pikachu overpowered it and defeated Bunnelby, giving Ash the first win against Clemont.

Bunnelby is the only Pokemon can drag Chespin away whenever he shows both his romantic and gluttonous side. He and Chespin were asked by Clemont to find a short fuse. During the errand, the purse was taken by a wild Fearow as they chased it. Chespin manage to get it back as both were chased by it. Bunnelby uses its Dig to escape to make Fearow trap its head. Upon reaching through the house on top of the hill, both were confronted by Team Rocket as they fought both James' Inkay and Jessie's Gourgeist. As they ended up being overpowered by them, they were saved by Ash's Fletchinder's Steel Wing to deflect Jessie's Gourgeist's Shadow Ball. With that, Bunnelby manages to shoot a Mud Shot on Team Rocket's faces followed by Chespin's Pin Missile to blasts them off. After that Clemont gives them praises for their effort.

Bunnelby also teams up with Clemont, Chespin and Luxray to find the wild Eevee and he was the one who let Eevee takes the Poke Puff so that Chespin who be blamed. After Serena captures Eevee and releases it to meet all of Ash's Pokemon, Bunnelby is the only Pokemon who let Eevee hides behind him due to her shyness and makes him dizzy when Chespin chases Eevee in circles.

Bunnelby, Chespin and Eevee are seen watching Shauna's performance at the Pokemon Showcase until Eevee runs off in fright due to Jessie's performance as Jessilie using her Gourgeist's Seed Bomb to create fireworks. After successfully finding Eevee, they continued watching Serena's performance and winning her Princess Key.

In From A to Z!, Bunnelby is released along with all of Ash and the group's Pokemon to meet Squishy during their Poke Puff break.

Bunnelby is the first Pokémon to battle Pikachu in the Kalos Region.

Bunnelby as a Diggersby in Pikachu's dream 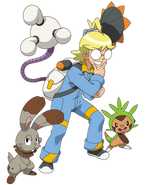 With Chespin and his trainer, Clemont
Add a photo to this gallery

Retrieved from "https://pokemon.fandom.com/wiki/Clemont%27s_Bunnelby?oldid=1285817"
Community content is available under CC-BY-SA unless otherwise noted.