For the variant appearing in the games, see Clay.

Clay is a character appearing in Pokémon Adventures, who is the Gym Leader of Driftveil City in the Unova region.

This section, or a part of it, has been transcluded from Clay; any changes involving it should be made there instead. /

Clay is a busy individual, whose business revolves around mining. It is why he doesn't always have the time to face challengers, and can be in a sour mood.

The name Clay comes from "clay", a type of sticky, fine-grained soil, often used to make pottery, bricks, and ceramics.

His Japanese name, Yaakon, comes from 坤 (kon, a sign in the I Ching system that represents earth) and, following the plant-based naming of most characters, "yacón" (a type of root vegetable that grows underground, following his specialty type).

Black researched that Clay was a Gym Leader that he'd have to defeat on his way, to participate in the Pokémon League.[1] Virizion, Terrakion and Cobalion - the three Sacred Swords - traveled across the Unova region, and saw that the Gym Leaders had a strong bond with their Pokémon.[2]

Clay led a mining expedition at the Desert Resort. His men found a strange stone, which confused Clay. He didn't pay much attention to it, and had his workers continue working. They thought the stone was important, but Clay reminded they were here about business. As he walked away, Clay sensed someone was behind him, and looked at the stone. As he grabbed the stone, he started to feel a powerful energy coursing through his body, and was blown away, shocking him.[3] However, Clay had uncovered the Light Stone at the excavation site, too.[4] At his Gym, Clay called Lenora to utilize her expertise to identify the stone. He wanted her to keep the stone because just its presence made him nervous, to which she agreed to come pick it up.[5]

Clay passed the two stones to Lenora, from which she hid the Light Stone in order to keep it as a secret from their enemies.[4] Lenora called other Gym Leaders, including Clay, to meet her at Nacrene City museum: she displayed the Dark Stone so the enemy would take the bait, and the Gym Leaders would be ready to fight them.[6] When Team Plasma became active in Driftveil City, Clay raised Driftveil Drawbridge to prevent them from escaping; however, Zorua sabotaged the bridge, forcing Clay to repair it. Clay met Black soon after and took offense at the fact that Black called Clay a "dirty trickster" while Zorua was impersonating Clay, and had his Pokémon chase the boy.[7]

Clay refused to battle Black and went back to his gym, to which Black assumed he was still angry for calling him a dirty trickster. Clay, at the Gym, had his people give him the report of the mining operations. His workers noted he was even more moody than usual, and Clay stormed them off for chatting about. In fact, Clay was still nervous about finding the stone, and thought to himself that Black could be an ally in this. He sent a worker, who took Black to the Gym. Black quickly went there, and took the elevator, where he encountered Clay. The latter explained his workers were gone, and Black was lucky to simply skip all the matches and face Clay himself. Clay sent Krokorok, who was hit by Black's Tirtouga. Clay noticed that the latter attacked on its own, to which Black confirmed, but he simply used the Water-type Pokémon against the Ground-type expert, Clay.

The latter laughed, seeing Black was funny, and added that his Tirtouga would evolve into a Carracosta someday. However, Black's Costa refused to obey him, which made Clay laugh even more. Since Clay's Palpitoad failed to inflict much damage on Tirtouga, Clay sent Excadrill. Excadrill spun around to hit damage on Costa, but failed. Black became quite fascinated by Costa's defense, while Clay noticed Black was a special kid to attempt to bond with his Pokémon during the battle, and it was like Lenora said about him. Black blushed, while Clay explained he found a strange stone in the Desert Resort, and gave it to Lenora for analysis. Clay explained that Lenora found out it was the Dark Stone, and assumed Costa must've seen when the Legendary Dragon, Zekrom, was formed as that stone. Black was confused, and was told that the Dark Stone was actually Zekrom in its sealed form.[8]

Clay remarked that was what Lenora told him. He believed because of such revelations, he could not mine, and even the Pokémon League may not be held this year, which terrified Black. Black wanted more answers, to which Clay promised to give, if Black would defeat him. As Clay's Palpitoad grappled Black's Musha, the latter used Zen Headbutt, and both Pokémon fainted. Clay sent Excadrill, and let it know it could dig wherever it wanted, as he intended to win the battle. Black had Nite do the same, and dealt some damage to Excadrill. Suddenly, Clay threw a rock to the generator, causing the Gym to turn pitch-black, and Nite and Excadrill exchanged blows and fainted as well. As Black sent Costa, who could not see anything in the darkness, Clay sent Krokorok, whose vision was based on heat signatures. Krokorok gained the advantage, as it gnawed on Costa's legs, while Clay laughed, considering Black was boasting about type advantage.

To turn the battle around, Black deceived Krokorok's vision by holding a rock on its back, making it look like his Costa. The real Costa fired a Water-type attack and defeated Krokorok. Clay was shocked about this strategy, but admitted Black was a funny boy, and mused that he should even call Costa "sir", as to how old it really was. Anyway, Clay explained that they were being watched by some people, regarding the Dark Stone, to which Black assumed the enemy must've been Team Plasma. Clay suspected as much, as those were well-informed people, believing they wanted to obtain Zekrom and unseal it. Since Team Plasma did not know how to do that, Clay explained they took the Dark Stone to Nacrene City's museum, where they would lure the enemy in and beat them up. He thought that Black might be the one who could help with Team Plasma. Black accepted his offer, and Clay took him to Mistralton City.[6]

Clay gave Black a quick tour of Mistralton City, famous for its harvests, which are quickly delivered by the airplanes. Clay took Black to the Celestial Tower, known to be a graveyard for Pokémon. Black winced, but Clay laughed and shoved him inside, seeing he was a bit scared. Inside, Black saw that Clay was attending the gym leaders' meeting at Celestial Tower. Clay explained they came here for the concern about Team Plasma, and they were to join Lenora at Nacrene City. However, Skyla took Black to her Gym to test him, leaving others behind. Clay became annoyed at Skyla, who left them.[9] Clay waited with the other Gym Leaders in the airplane. He became mad that Skyla ditched them, to which Burgh asked of him to calm down. Brycen muttered that it was a bad plan if they had to wait, which made Clay even more upset. A moment later, Skyla joined the Gym Leaders at the airplane, and took them to Nacrene City. There, Brycen and others joined Lenora in the fight against the Shadow Triad, who were attempting to steal the Dark Stone.[10]

Clay faced the Shadow Triad, and teamed up with Elesa to confront one of the intruders. Clay's Excadrill went to attack Lilligant, who used Quiver Dance and Mega Drain. However, Elesa's Emolga used Acrobatics to hit Lilligant, to which Clay thanked Elesa, reminding they should not slack around. While battling, he noticed how amazing Brycen was, as his tactics allowed him to capture the Shadow Triad with an icy chain. The Gym Leaders confronted the Shadow Triad, and demanded of them to take them to Team Plasma's king. However, the Shadow Triad called upon the Weather trio: Tornadus, Thundurus and Landorus, who emitted a giant surge of energy, forming a whirlwind that engulfed the Gym Leaders. Black approached them, but Clay told him to stay put and defend the museum. Even as Clay got hit by a rock, causing him to bleed, Clay reminded Black he was not powerful enough to take on the Weather Trio, but Black ignored him. To save the Gym Leaders, Black went to attack, and his Nite evolved.[11] However, Black failed to hit Tornadus, Thundurus and Landorus, who blew him away. Without further ado, Skyla, Clay, Burgh, Elesa, Lenora and Hawes were taken away, while Brycen made a dummy ice sculpture of himself to escape their capture.[12] Brycen was searching far and wide to find any traces of Team Plasma, and wondered where the Gym Leaders, like Clay, could have been taken to.[13]

When the Pokémon League began, Caitlin used her powers, and detected that the Gym Leaders were in a dark place. She conveyed their message: "HELP".[14] Caitlin went to Black, who was having a battle against Drayden. Caitlin interrupted the battle to have Gothitelle touch Black's head, linking his mind with the Gym Leaders, who were trapped in a strange dark place. Skyla, Burgh, Elesa, Clay, Lenora and Hawes appeared in Black's mind, who asked of him not to be gloomy, and not to give up. They apologized for putting a lot of strain on Black, and have heard that Black's Musha had abandoned him. Black didn't want their condolences, believing Musha would've abandoned him sooner or later. Clay admitted that Black's Tirtouga had opened his eyes, inspiring him. The Gym Leaders exclaimed that Black had defeated them all because he was listening to his Pokémon, and the answer was inside of him.[15]

Brycen, who heard the news about the missing Gym Leaders, suspected that their memories have been wiped out, for they could not remember where they were taken to.[16] As N's castle emerged from the ground, Ghetsis revealed that Clay was crucified, along with the rest of the captured Gym Leaders.[17] The trainers, who fought to release the Gym Leaders, had Patrat chew off the ropes binding them. The Gym Leaders were released, and joined the fight against the Team Plasma Sages.[18] With the battle over, Clay watched N departing away with Zekrom into the sunset.[19]

At Opelucid City, Clay had his workers drill through the ice, to rescue the people from the frozen buildings, and shouted at his workers to do better. When Drayden slipped on the ice, Clay warned him to be careful, else he would be the one needing help.[20] 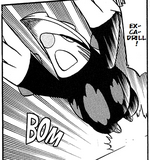 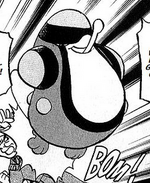