Quake Badge
Clay is the Gym Leader of the Driftveil City Gym. His gym is the fifth gym to be challenged by the trainer. He specializes in using Ground-type Pokémon. He will award the player character the Quake Badge if defeated. His outfit resembles that of a Texan businessman's and he has a Texan accent.

Judging by his appearance, Clay has the serious attitude of an industrious and time-constrained company owner.

He is later seen helping the player character in N's Castle by holding off all of the Sages alongside the other Gym Leaders, excluding Cilan, Chili and Cress.

In Black 2 and White 2, he has redesigned his Gym. After the player character defeats him. Clay will question Hugh on his rage towards Team Plasma. If Memory Link is used, it is shown that Clay interrupts a conversation between Burgh and Lenora about bones, by bringing a fossil for her to evaluate as he hopes to sell the piece at a high price. Unfortunately for Clay, the fossil was quite common, however with a rather unusual soil. This brings newfound hope for Clay to keep digging on his tunnel. Burgh questions Clay about what he thinks on bones. Clay replies that bones are what's left when one passes away. The three are seen satisfied with the many opinions on the subject. 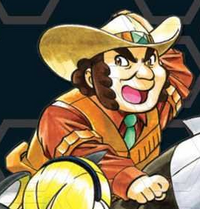 Retrieved from "https://pokemon.fandom.com/wiki/Clay?oldid=1360499"
Community content is available under CC-BY-SA unless otherwise noted.