Clawitzer is an aquatic Pokémon that bears a resemblance to shrimp and lobsters. Its sky-blue segmented shrimp-like body is relatively small compared to the size of its enormous right claw. Its massive right claw is deep blue in color and resembles the face of a dragon. The claw is segmented and armored, and has two yellow antennae extending out from the back; the bottom part is yellow. This claw functions as an extremely powerful cannon, able to expel cannonballs of water forcefully enough to tear apart tanker hulls. Clawitzer's body is covered in black striped segments.

Clawitzer detects prey with the feelers attached to its massive claws before launching cannonballs made out of seawater. These cannonballs have enough strength to not only puncture and submerge a large tanker ship, but also rip through a large metal sheet. Clawitzer uses water released from its rear nozzle to propel forward at 60 knots.

Clawitzer evolves from Clauncher at level 37.

Clawitzer is based on a pistol shrimp (which have asymmetrical claws, the larger of which can shoot waves of bubbles to stun or kill its prey). It may also be based on American lobsters that turn blue as a result of gene mutation. Its body shape also resembles that of a shrimp.

Clawitzer comes from claw and howitzer.

Its Japanese name, Burosutā is a portmanteau of blaster, blow, and lobster. It is also an anagram of "lobster" written in Japanese (ロブスター, robusutā). 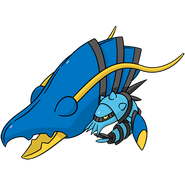 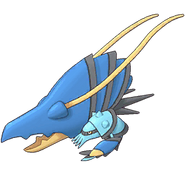 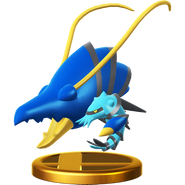