Clauncher is a small aquatic Pokémon that resembles lobster or shrimp. Its segmented body is a vivid blue color, with yellow antennae and eyes, and black stripes along its claws and back. Its underbelly is white. Its right claw is significantly larger than its left claw. It has four small blue feet. Clauncher bears a slight resemblance to Corphish.

Clauncher is able to use its large claw as a pistol, launching spheres of compressed water to defeat opponents. If it loses a claw in battle, Clauncher is able to grow back a new one. The flesh of a Clauncher's claw is somewhat regarded as a delicacy in both Alola and Galar.

Clauncher evolves into Clawitzer at level 37.

Clauncher is based on a pistol shrimp. In real life, pistol shrimps are incredibly dangerous despite their small size, as they use a specialized claw to create a hot high-speed bubble to attack prey. It may also be based on American lobsters that turn blue as a result of gene mutation.

Clauncher is derived from claw and launcher.

Its Japanese name, Udeppō, comes from 腕 (ude, arm) and 鉄砲 (teppō, gun). It may also derive from depth, as it lives underwater. 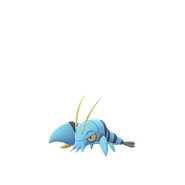