Rising Badge
Clair is a character appearing in Pokémon Masters. She is the Gym Leader of Blackthorn City in the Johto Region, and gives the Rising Badge to trainers who defeat her. She is also a user of Dragon-types, much like her cousin, Lance who became one of the Elite Four in the Kanto region.

Clair has pale skin, blue eyes and light blue hair, tied in a ponytail with a beige hair band. Two large spiked fringes frame her face and point outward, and a third fringe rests in the center of her face between her eyes. She also has very thin eyebrows, and visible eyelashes.

Clair's game style is useful in 3v3 battles. Her strongest move Draco Meteor can deal massive damage but it sharply lowers her Special Attack. Her Item Move and Trainer Move can, however, be used to increase or restore these decreased stats but since these moves can be use limitedly, Clair isn't viable in longer battles and is overshadowed by other dragon strikers such as Iris and Sygna Suit Cynthia. 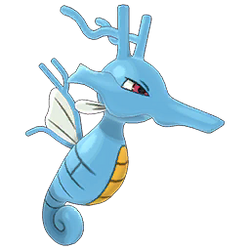 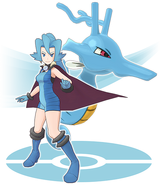 Retrieved from "https://pokemon.fandom.com/wiki/Clair_(Masters)?oldid=1382549"
Community content is available under CC-BY-SA unless otherwise noted.