The Blessed User of Dragon Pokémon

Clair is the Gym Leader of the Blackthorn City Gym located in Johto. She uses Dragon-type Pokémon, much like her cousin, Lance.

Clair has pale skin, blue eyes and light blue hair, tied in a ponytail with a beige hair band. Two large spiked fringes frame her face and point outward, and a third fringe rests in the center of her face between her eyes. She also has very thin eyebrows, and visible eyelashes.

Clair holds a great deal of pride in her appearance — much like Lance does. Her competitive and tough, prideful attitude is often seen as both inspirational and intimidating to some.

However, once she is defeated, Clair is a sore loser and initially refuses to award her Gym's badge to the player character until she was convinced otherwise.

The name Clair comes from "lair" (as in a dragon's lair).

Her Japanese name, Ibuki, may originate from 息吹 (ibuki, breath, in reference to Dragon Breath). Following the plant-based naming of most Gym Leaders, it may also literally be 伊吹 (ibuki, the Japanese name for the Chinese juniper tree).

Clair's Gym title is "The Blessed User of Dragon Pokémon". 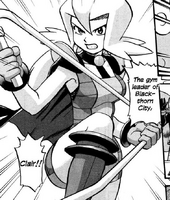 Clair's VS sprite in Gold & Silver

Clair's VS sprite in HeartGold & SoulSilver

Beta(left), final (right)
Add a photo to this gallery
Retrieved from "https://pokemon.fandom.com/wiki/Clair?oldid=1421930"
Community content is available under CC-BY-SA unless otherwise noted.