Volcano Badge
Cinnabar Island (グレンタウン Guren Town) is an island in Kanto. The Pokémon Mansion is located here. Blaine is the resident Gym Leader here in Generation I and Generation III. The Pokémon Lab is also located here. In Generation II, a volcano erupted leaving only the Pokémon Center and forcing Blaine to move his gym to the Seafoam Islands. The coast on the East side is famous for the Missingno Glitch.

Cinnabar Island has a population of 33 people.

The island population is 9 people, all only present in the Pokémon Center, due to the eruption that had happened a year before the events of Pokémon Gold and Silver.

FireRed and LeafGreen adds three more people to the island, making the population 36.

In HeartGold & SoulSilver, the island's population is 9. The only building on the island is a Pokémon Center since the island has been overwhelmed by an eruption a year prior to the game's events. In addition, rocky walls can be found on the island that can be scaled by using Rock Climb.

The fossil research lab (Gen I)

The Pokémon Mansion (Gen I)

After the player retrieves the Secret Key from the Pokémon Mansion, it can enter the gym.

Surfing by the eastern portion of Cinnabar Island has become most infamous for the MissingNo. glitch.

In Generation II, the only building on Cinnabar is the Pokémon Center. 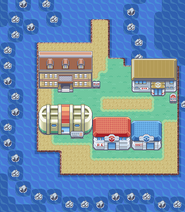 Retrieved from "https://pokemon.fandom.com/wiki/Cinnabar_Island?oldid=1364712"
Community content is available under CC-BY-SA unless otherwise noted.