Cinderace (エースバーン, Eesubaan) is a fire-type Pokémon that was introduced in Generation VIII.

Cinderace is a bipedal, lagomorphic Pokémon with white fur, a red fur tuft on its head (along with a yellow accent that gives off an impression of a crown), and large ears, each with yellow insides. On its torso, there are black "shoulder bands" over the arms and a "V-neck," which gives the impression of a tank top. On the bottom, it has red haunches with one yellow stripe on each side and fluffy cuffs, which give off the appearance of shorts. Its legs are mainly black with red-tipped toes.

As Gigantamax Cinderace, it becomes larger with a few alterations. Its ears become longer, and their yellow insides extend. It stands atop a gigantic Pyro Ball that has a mouth and eyes. Several fire-like ears can be seen around it, and a crest shaped like a fiery bird sits on top of the fireball's head.

Similarly to Incineroar, Cinderace are very confident and love the spotlight. They also get pumped up when cheered on-but if they get overconfident, they risk getting overtaken and put in a tough spot.

Whether experiencing a victory or loss, they are good sports that can recognize a stronger foe and learn from their mistakes in battle. Trainers that are determined to always strive towards the horizon will find Cinderace to be great partner Pokémon on their journeys.

Cinderace excel in physical strength and are skilled with both offense and defense. They have strong legs and are experienced with juggling thanks to training so hard as a Raboot. Cinderace can create a burning soccer ball by kicking a pebble and igniting it; by using their powerful kicking abilities, they can leave their opponents with a scorch mark, regardless of which pose they use to perform their mighty blows.

When it undergoes Gigantamax, the burning ball at Cinderace's feet grows to massive proportions thanks to Gigantamax energy. If Gigantamax Cinderace kicks the ball using its well-honed techniques, its fighting spirit will possess the ball and cause it to pursue opponents as if it has a mind of its own. Gigantamax Cinderace also boasts incredible leg strength—its legs are said to rank among the strongest of all Pokémon. Even without its gigantic Pyro Ball, it can deliver powerful kicking moves that overwhelm other Dynamax Pokémon.

Cinderace is the final form of Scorbunny, and it evolves from Raboot starting at level 35.

Cinderace made its anime debut in PJ045, where it evolves from Goh's Raboot during their battle with Oleana in the Darkest Day arc.

Trainers with a Cinderace

Cinderace is based on a rabbit or hare and a professional soccer player. In the UK, which is the real-life equivalent of Galar, soccer is called "football." The shape and arrangement of its foot pads may have been derived from soccer cleats. Its association with soccer might've been inspired by the superstitious belief of a rabbit's foot bringing good luck.

The three fully evolved Starter Pokémon of Galar also each seem to represent a form of entertainment, with Cinderace representing sports entertainment.

Its Gigantamax form might be based on acrobatics performers.

Cinderace is a combination of cinder, race (referring to its speed), and ace (a player rank). 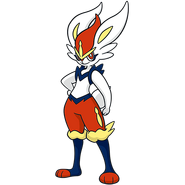 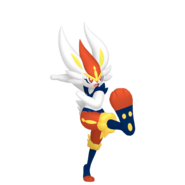 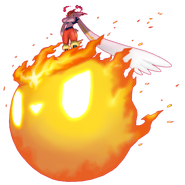 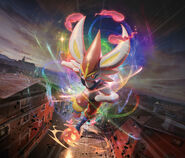