Cinccino is a small rodent-based Pokémon that resembles a chinchilla; it bears a very strong resemblance to its pre-evolution, Minccino. Its fur is mainly gray, and it has very fluffy and pure silky white tufts of fur encircling its ears and head, wrapped around its neck like a collar, and covering its very long voluminous tails. Its long, silky white tails wrap around its body like a scarf. It has short, small paws and feet, and paw pads on the undersides on its fore-paws and feet. Like Minccino, it has large, round ears with pink insides and fluffy tufts on the outsides. Its face is practically identical to Minccino's, with ovular brownish eyes and a tiny nose and mouth.

Like its pre-evolution, Cinccino is a very cleanly Pokémon that always keeps its fur neat and tidy. Its white fur feels amazingly silky soft to the touch due to its frequent self-grooming. Cinccino smears oil all over its nest to keep it free from filth.

The fur covering Cinccino's body is coated in a special oily substance that enables it to deflect opponents' attacks in battle, and can also be applied to help people with dry skin, so its oil extraction is sold at a high price in the markets. Their extremely silky white fur repels dust and prevents the buildup of static electricity.

Since it's a chinchilla-based Pokémon, it should live in mountainous areas with very low temperatures, kilometers above the sea level. Yet, Cinccinos and Minccinos were seen in low-density forests in the anime. It would be justifiable to expect Cinccinos to live in jungles, since the high levels of humidity would justify why Cinccino's fur had developed special protection against water. But that wouldn't justify Cinccino's high protection against cold climates. Areas with low temperature rarely display excessive humidity in any ways, discarding Cinccino's necessity for a waterproof oil-coated fur.

Cinccino is the evolved form of Minccino, whom it evolves from with a Shiny Stone.

Cinccino is based on a Chinchilla and different types of fashion accessories such as boas or scarfs. This may be because chinchillas are hunted for their fur, sometimes to make such objects.

Cinccino and its Japanese name, Chirachiino, come from chinchilla and chino cloth. 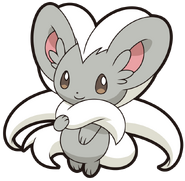 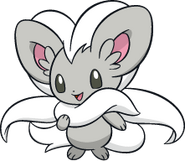 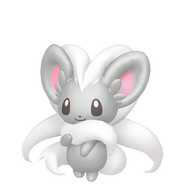 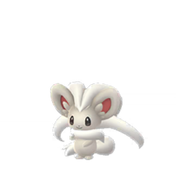 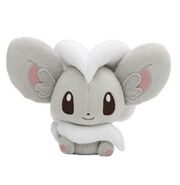