For the variant appearing in the games, see "Chuck".

Chuck in other languages

Chuck is a character appearing in the anime series, who is the Gym Leader of Cianwood City in the Johto region.

Chuck is a large, muscular man. He has fair skin, brown eyes, and short brown hair, along with a large, spiky moustache. Chuck is shirtless and doesn't wear any shoes, typically for a Fighting-type Gym Leader.

Chuck likes training with his Pokémon and shows toughness by getting hit by his Pokémon's attacks. He applies this method by having his Pokémon focus on their opponent and try to withstand their attacks. He also praises the bonds the trainers have with their Pokémon, knowing that is the key to success, hence why he cries at his Pokémon's successes and fails. Chuck also doesn't like his wife calling him "flabby".

The name Chuck comes from "chuck" (throw). It may also be a reference to the famous martial artist Chuck Norris, or from nunchucks or nunchaku, a traditional Japanese melee weapon.

His Japanese name, Shijima, originates from しばく (shibaku, to strike) or 黙 (shijima, silence). Following the plant-based naming of most Gym Leaders, it may also come from Haoruchia-Shijima, the Japanese name for the Haworthia genus of plants.

Chuck was training with his Machoke first on Defense, then on Offense. Machoke executed Karate Chop, then Submission on Chuck, who took serious damage. However, he was teary-eyed, being proud of Machoke's power. He then noticed Ash and went drill sergeant at that point, forcing him, Misty, Brock, and Pikachu to march all the way to the gym. Though the heroes came to the Gym, Chuck was exhausted, but still thought the heroes were out of shape. There, Chuck was greeted by his disciples. His wife gave the heroes lunch and thought Ash would defeat her "flabby husband", which made Chuck angry to be referred to as that. Before the battle started, Chuck announced to Ash that he'd use Machoke and Poliwrath, the latter being sent out. Pikachu tried to electrocute Poliwrath but missed. Instead, he used Quick Attack on Poliwrath, who defeated Pikachu with Double Slap. Chuck cried for Poliwrath's victory, while Ash sent Bayleef out.

Bayleef tossed Poliwrath away with Vine Whip and defeated it with Body Slam. Chuck cried once more, as Poliwrath was defeated. Instead, Chuck sent out Machoke and asked it to use Karate Chop on him. Machoke did so to prove Chuck's toughness, but Ash had his Bayleef use Body Slam on himself. After launching Cross Chop, Machoke grabbed Bayleef's vines and pulled her away. Bayleef used the same attack and tossed Machoke away. While Chuck had his Machoke focus, Bayleef defeated it with a Body Slam and Razor Leaf combination. Despite his loss, Chuck was impressed by the battle, seeing Bayleef knew what Ash was thinking, through the bonds the two created. Pointing out through bonds, one can win the Johto League, Chuck gave Ash the Storm Badge. Since the heroes were heading to Olivine City, Chuck advised them to sail through the Whirl Islands and advised Ash to keep on training. The following day, Chuck and his wife bid farewell to the heroes, who sailed away.[1]

When Team Rocket stole Ash's badges, Ash was searching for the lost badges. He also remembered his battles with the Johto Gym Leaders, including Chuck and his Machoke, as Ash and his Pokémon won those badges through hard effort.[2]

After arriving at Dewford Town's Gym, Max read the sign "Fight the Big Wave". Brock suspected it was a fighting-type Gym and remembered Chuck, who was also a tough trainer.[3] Scott mentioned that Greta was inspired by Brawly and Chuck when the heroes wondered what Pokémon Greta used.[4]

While Ash wanted a rematch with Bea, the former encountered Chuck. Chuck remembers Ash's battle with him, and then watched the rematch between Ash and Bea. After this, everyone had dessert.[5] 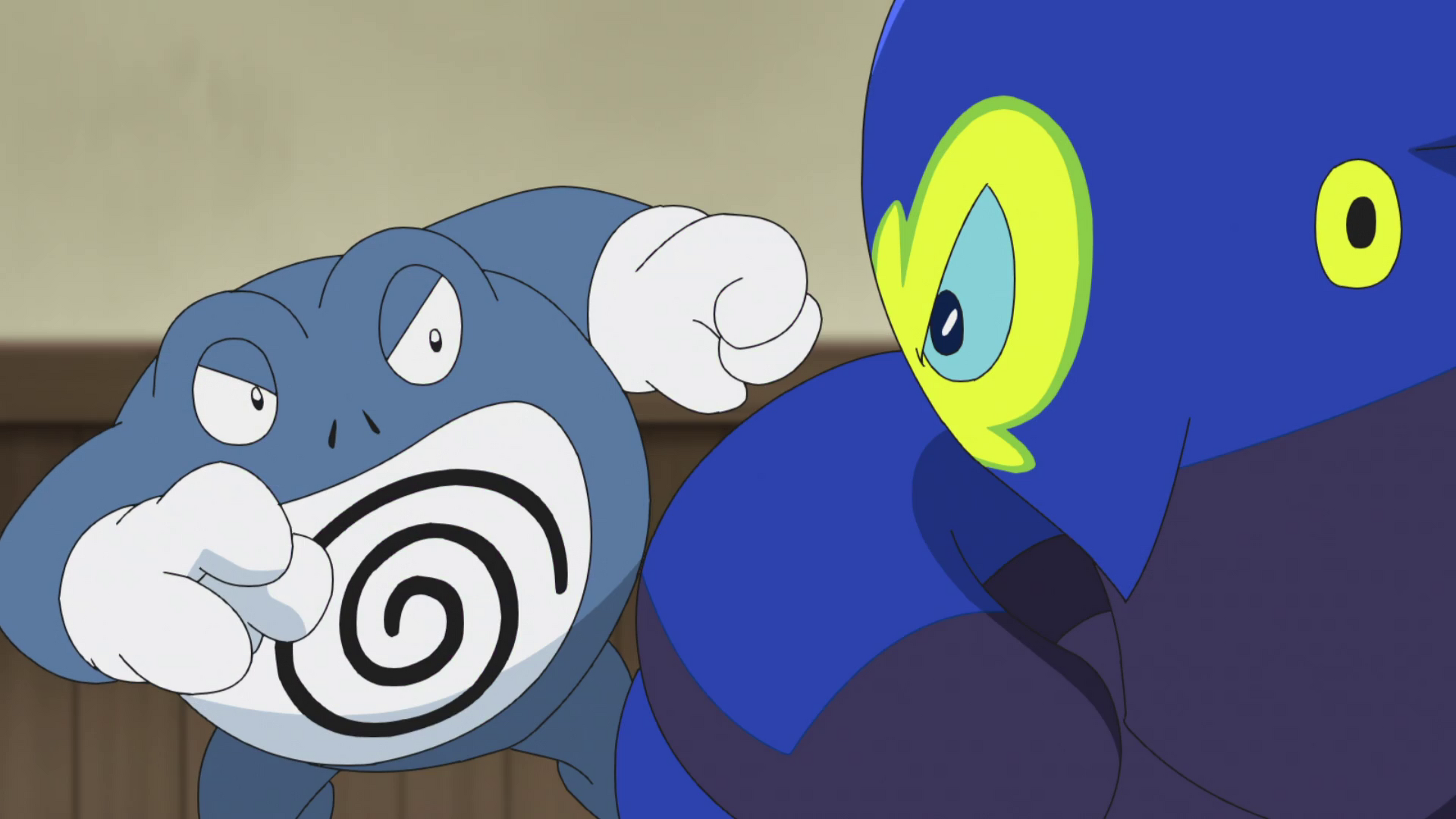 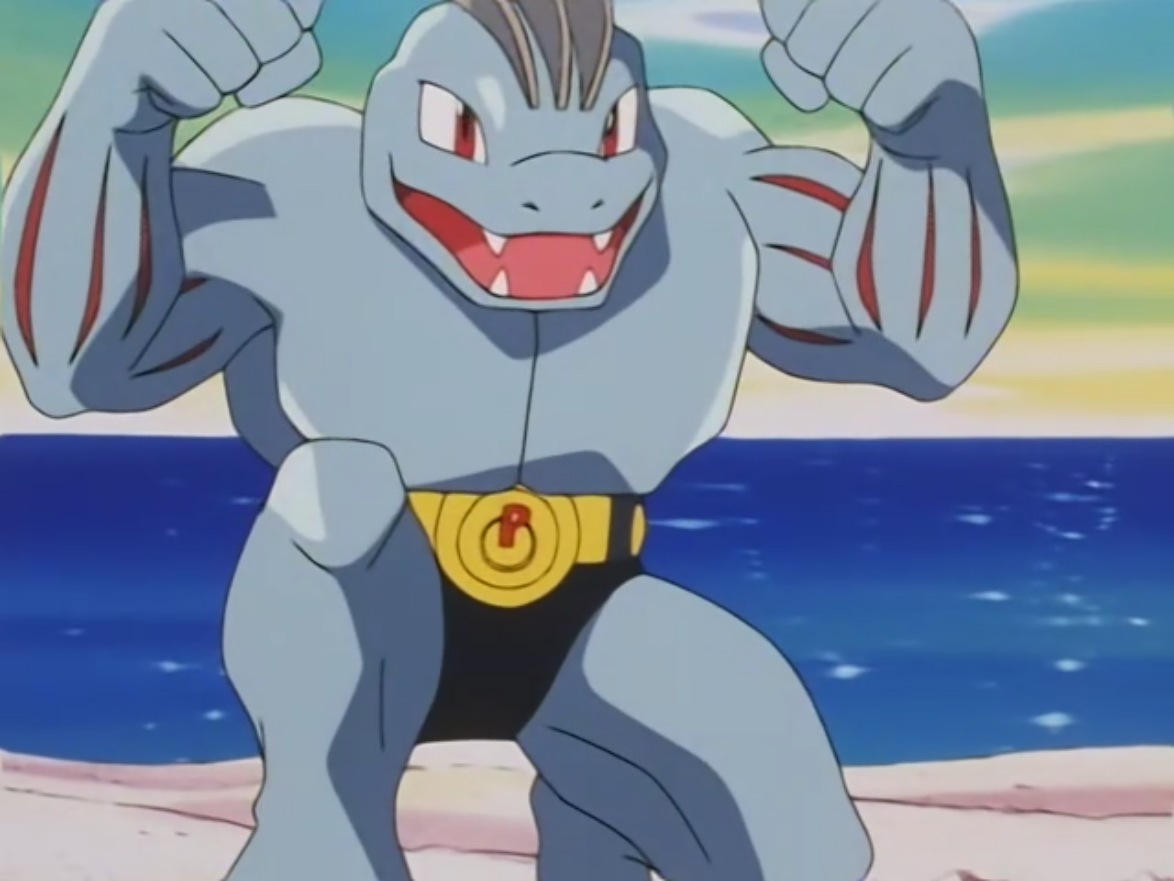