His Roaring Fists Do the Talking

Chuck in other languages

"Wahahah! So you've come this far! Let me tell you, I'm tough! My Pokémon will crush stones and shatter bones! Watch this! Urggh! Oooarrgh! There! Scared now, are you? What? It has nothing to do with Pokémon? That's true! Come on. We shall do battle!"
— Chuck, Pokémon Gold, Silver and Crystal.

Chuck is the Cianwood City Gym Leader. He specializes in using Fighting-type Pokémon.

Chuck is a large, hefty, muscular man. He has fair skin, brown eyes, and short brown hair, along with a large, spiky moustache. Chuck is shirtless and doesn't wear any shoes, typically for a Fighting-type Gym Leader.

As his title (His Roaring Fists Do the Talking) suggests, Chuck is a very loud and cocky man. As a result of his grueling training, he is usually very sure of himself in battle, though he respects people who beat him. However, contrary to what his personality suggests, Chuck actually has a massive sweet tooth. After he finishes his daily training, he sneaks behind his wife's back to feast on sweets. Ironically, while Chuck thinks he hasn't put on too much pounds for it to be visible, his fat belly and his wife say otherwise. When the latter is talked to by the player character, she may talk about how her husband is getting chubby. He spends very little time with his wife which makes his wife upset. She always stands outside his gym, hoping he would come out.

The name Chuck comes from "chuck" (throw). It may also be a reference to the famous martial artist Chuck Norris, or from nunchucks or nunchaku, a traditional Japanese melee weapon.

His Japanese name, Shijima, originates from しばく (shibaku, to strike) or 黙 (shijima, silence). Following the plant-based naming of most Gym Leaders, it may also come from Haoruchia-Shijima, the Japanese name for the Haworthia genus of plants.

Because of him being busy in training, his number cannot be obtained by him but his wife.

Chuck can be found in Johto Gym Leader Castle in Pokémon Stadium 2. He has very few Fighting-type Pokémon in his team. Though, all of his Pokémon know his signature move Dynamic Punch. 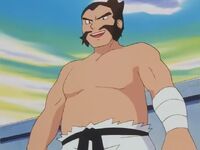 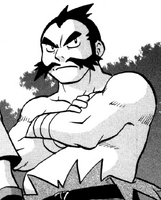 Chuck's VS Sprite in HeartGold and SoulSilver

Chuck's Battle VS Scene in Black 2 and White 2