Chloe is a character appearing in the Pokémon Journeys series. She is the daughter of Professor Cerise and Yoshino, and Sōta’s big sister, she normally attends school in Vermilion City.

Chloe is a short and slender young girl with maroon hair, fair skin, and asparagus-green eyes. She also braids her hair and keeps it in a side ponytail with a cherry blossom-shaped clip.

For clothing, Chloe wears a school uniform that consists of a baggy white dress with blue anchors on the sides, a blue and white collar around her shoulders, and a yellow ribbon around her neck. On her feet, she wears black socks with white lines at the tops and blue and white shoes that match her dress. Much of her school outfit also has yellow accents. To keep her homework and school materials safe, she carries a brown schoolbag around with her. The bag has different pockets for storage and gold-colored buckles.

When Chloe goes to sleep, she wears a simple white top with a red ribbon and pink shorts. (While her mother Yoshino once drew a picture of a pajama-clad Chloe with pink feet, she doesn't wear socks when she sleeps.)

On the outside, Chloe appears to be detached and cold when she talks to other people. She is also very aloof (so she prefers to keep to herself most of the time), but she does have a few friends. Despite this, Chloe has a prickly side, as she often gets verbally aggressive towards people that upset her. She is easily exasperated and dislikes when people make assumptions about her, which has caused her to put up a wall around herself.

Before the events of PJ011, Chloe also grew to dislike Pokémon for some unexplained reason. She even treated her own family's Yamper with coldness and scorn before it saved her life. However, Chloe used to have a different attitude towards Pokémon in the past (a facet of her personality that her friend Goh remembers). Whatever the reason for her drastic change in attitude is currently unknown, though she does dislike when people make assumptions about how she must like them due to being Professor Cerise's daughter.

Chloe also seems to have boy troubles, as she is often annoyed or upset by most of the males she talks to, even her own family members. (She's also been shown to have three female friends, compared to just one male friend in Goh.) Having to deal with Goh and her father's antics for most of her life may have been the catalyst, but whether or not this is the case remains to be seen.

Since Professor Cerise is Chloe's father, she naturally loves him. They share a healthy, loving relationship, but like with any family, their bond isn't perfect-- Professor Cerise's antics and childlike wonder for everything often embarrasses his daughter, prompting her to scold or snap at him in an attempt to reign him in.

Yoshino is Chloe's mother, so she loves her very much. Unlike with her father and brother, however, Chloe seems to get along with her mother much more than the males in her family-- she doesn't get annoyed by her mother, and she doesn't snap at her. Chloe even goes to her mother for advice whenever something troubles her.

Unlike some siblings, Sōta and Chloe seem to get along well, with little to no rivalry or major fights. However, while Chloe's brother supports her, they don't completely see eye to eye-- like with most of the males she knows, Sōta sometimes annoys her.

Chloe and Goh are childhood friends. While she doesn’t like Goh's boastfulness and hyper attitude, she cares about him, often frequently reminding him to behave and do his homework. She also sometimes gets concerned for his safety, especially after he became her father's assistant along with Ash.

Chloe doesn't have the best relationship with Ash. When they first met, Chloe was suspicious of Ash and quickly shuffled away without talking to him, despite the fact that her Yamper electrocuted him. Since then, Chloe has said almost nothing to him, even though Ash is a nice person and would be more than willing to be friends with her. Whether this is due to her aloofness, exasperation with rambunctious boys, or simple disdain for him is currently unknown.

At first, Chloe treated her family's Yamper with coldness and indifference, despite the fact that it loved her more than anyone else. She didn't care for the Pokémon at all, even though it was entirely devoted to its "mistress" and fiercely protected her. However, Chloe eventually gained a newfound respect for the Pokémon after it saved her and her family from an evil Gengar.

When she was young, Chloe invited her childhood friend Goh to go to Professor Oak's Pokémon Summer Camp with her. During their visit in Pallet Town, Chloe and Goh encountered the Mythical Pokémon Mew. The two chased after the unknown Pokémon, but it eventually got away in the aftermath of a baby Kangaskhan rescue. Professor Oak later confirmed that the Pokémon they saw was most likely the Mythical Pokémon Mew.[1]

Four years later, after Chloe came home from school one day, she was greeted by her Yamper and a weird sight: an electrocuted Ash lying on the ground. Becoming suspicious of the injured boy, Chloe quickly shuffled away and didn't talk to him or get concerned. Chloe then wondered where Goh was, becoming annoyed shortly after when he sent her a message saying he'd be late for the opening ceremony of her father's research institute. After the two boys got back from their adventure with Lugia, Chloe met up with them. She admonished Goh for being late and gave him his homework, becoming angry when he complained about it. Later that same evening, Chloe had to remind her father to give Goh a Kanto Starter Pokémon. When Goh refused, saying that he wanted Mew, both the professor and his daughter were dumbstruck.[2]

Then, some time after Ash caught a Dragonite, Chloe almost missed school one day due to sleeping in too late. While her family's attempts to get her out of bed were fruitless at first, Chloe's mother eventually made her crack by saying that she wouldn't have time to braid her hair. Chloe groggily fussed about on top of her bed for a bit before she eventually came to her senses, blushing in embarrassment afterwards. Chloe's mother then helped her get ready for school, and they ate breakfast shortly after. While Chloe's family ate, her Yamper begged her for food, refusing to eat unless if she was the one that fed it. Chloe's family briefly mused about the fact that although the Yamper loved Chloe the most out of everyone in her family, she was the one who treated it the coldest (which shocked her). After they finished eating, Chloe's father took her and Yamper on a car ride, where the Pokémon tried to express its unwanted love for Chloe by licking her face. After she got out of the car, Chloe briefly met up with Ash and Goh. She then left Yamper behind with the two boys while she went to school, much to its disappointment. During her time at school, Chloe got bullied by a classmate, causing her to seek her mother out for advice. When Chloe eventually came back home after a long day at school, her father instructed her to command Yamper to use an attack against an evil Gengar. Since Chloe wasn't a battler, she internally struggled for a bit, but she eventually commanded Yamper to use Spark, resulting in the troublesome Pokémon being blasted out of the building. Later, Chloe cuddled in bed with her Yamper, happy that it saved her and having a newfound appreciation for it.[3]

Chloe and Goh as children 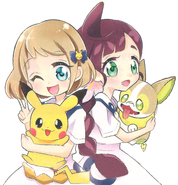 Chloe and her friend Mika
Add a photo to this gallery

Retrieved from "https://pokemon.fandom.com/wiki/Chloe?oldid=1264591"
Community content is available under CC-BY-SA unless otherwise noted.