For the variant appearing in the games, see Chili.

Chili is a character appearing in Pokémon the Series: Black & White, who is one of the three Gym Leaders of Striaton City in the Unova region.

This section, or a part of it, has been transcluded from Chili; any changes involving it should be made there instead. /

Chili is a tall, slender young man with brick-red hair that spikes up in places, making it resemble a flame, and bright scarlet red eyes. He wears a long sleeved white shirt under a black waistcoat with big gold buttons, black slightly baggy trousers, a white apron, and brown shoes with rounded toes and golden buckles, much like his brothers. He also wears a red bowtie, corresponding with his hair and eye color, and his choice of Fire-type Pokémon.

Chili tends to be troubled/hot-tempered and competitive.

The name Chili comes from "chili pepper", a spicy fruit.

His Japanese name, Poddo, may come from the name of pod corn, following the corn theme of his brother's Japanese names and the plant-based naming of most characters. The kana that make up his name are also similar in appearance to ホット (hot).

Chili had two brothers, Chili and Cilan. The two had many battles, with Chili using Pansear. This led to them to accept the idea of bonding with Pokémon and understanding their hearts through battles, which would improve their skill and strength.[1]

When Ash arrived hoping to win his first gym badge, Cilan led Ash and Iris to the Striaton City restaurant, where he was joined by his brothers, Chili and Cress. The three brothers explained to Ash that this was also a Gym and that they all were Gym Leaders, exciting Ash. The three brothers explained that Ash could choose one of them to battle, and sent their Pokémon out, with Chili using Pansear. Ash wanted to battle all three brothers, surprising them, who accepted his request: he'd obtain their badge if he could defeat two of them. Chili used Pansear against Ash's Tepig, who participated in this first Trainer battle. Tepig endured Pansear's Fire Punch, and Dig attacks, but it gnawed on Pansear's tail. Pansear failed to shake Tepig off, who slammed it to the ground and defeated it. Chili then watched Ash's match against Cilan.[2]

Cress and Chili continued watching Cilan's match against Ash, who won the battle. Later, Cilan helped Ash and Iris thrwart Team Rocket's plans, and decided to accompany them. He bid farewell to his brothers, who wished him luck in his journeys.[3] A long time ago, Burgundy and Oshawott had challenged Cilan, but lost. Burgundy later wanted to rechallenge Cilan, but was told by Chili and Cress that he left Striaton City Gym.[4] Chili continued to battle, but felt that he was losing battles too quickly. Cress htold Chili that he was only using offensive moves, and did not use any defensive techniques. Chili became outraged and ran off on a journey, which made Cress worried, who was left alone in charge of the Gym.

Some time later, the heroes encountered Chili, who wanted to battle Cilan. Chili was aware of Cilan's talent as a Pokémon Connoisseur, so his Pansear fired Flamethrower and used Fire Punch. Pansage evaded its attacks, to which Chili believed that dodging was not battling. However, Pansage fooled Pansear into attacking and used Rock Tomb and Solar Beam to defeat it. Chili became upset and blamed Pansear. Cilan felt that Chili should take responsibility, whom Pansear burned before running away. Having a talk with Cress, Cilan realized that Chili wanted to become a stronger Trainer, even if he was flameboyant. They went to a restaurant, finding Chili eating donuts. Chili admitted that he wanted to adapt his battle style, and test it out by battling Cilan. Cilan wanted to see what new things Chili learned, but Iris reminded that he had to find his Pansear first.

The group found Pansear eating apples on a tree. Chili apologized to Pansear, who threw apples at him. However, Pansage convinced Pansear to descend down, and Chili admitted of opening his own Fire-type Gym someday, which pleased Pansear. Cilan noted that Pansear was meant to be with Chili, considering their similar personalities. However, since Pansear knew only Fire-type moves, Cilan suggested that Pansear could learn Solar Beam. Chili agreed, thinking of offensive moves, believing the best defense is a good offense. Cilan demonstrated to the group to absorb sun's energy, which let Pansear learn Solar Beam. Since Pansear was not trained enough to execute the attack, the group spent time with physical exercises.

With Pansear learning the move, Cilan felt that Chili's defenses were weak, but he could use his offensive power into a mighty force. To test that out, Chili battled Ash, using Pansear against his Oshawott. Oshawott used Razor Shell and Tackle to attack Pansear, causing collisions. After getting struck with Razor Shell, Pansear fired Solar Beam, defeating Oshawott. Chili became glad he won; he later called Cress and apologized to him for the harsh words. Chili bid farewell to the group, as he went back to his Gym.[5]

Ash remembered battling the Unova Gym Leaders, including Cress, the night before he entered the Unova League.[6] One day, Chili and Cress were challenged by Morana, but instead of their badge, she wanted to take over the Gym. Cress refused, but Chili, being a hothead, accepted her match. Morana defeated them, but since the third Gym Leader, Cilan, was absent, she went to find him and defeat him as well, letting the two "pathetic Gym Leaders" run the Gym before she would return.

Chili and Cress contacted Cilan, who was on a cruise ship to Kanto. The two brothers explained there was trouble ahead, and went to meet up with Cilan. As they did, they noted that the woman, Morana, had arrived. Cilan noted that the fate of the Gym was in his hands, as he battled Morana, with Chili and Cress watching. Cilan defeated Morana, but since he wanted to continue his journeys, Chili and Cress decided to stay around in the Gym to protect it until Cilan's return.[1] 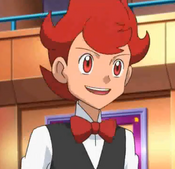 Chili eating his stress away with donuts.

Chili on the ground

Chili running away from the Striaton Gym.

Chili hugging his pansear after their victory.

Chili in the Pokémon Center 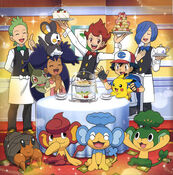 Chili in the Pokémon 2011 calendar.