Chili is the first Gym Leader to be encountered in Unova, if Snivy is chosen at the beginning.

Chili is a tall, slender young man with brick-red hair that spikes up in places, making it resemble a flame, and bright scarlet red eyes. He wears a long sleeved white shirt under a black waistcoat with big gold buttons, black slightly baggy trousers, a white apron, and brown shoes with rounded toes and golden buckles, much like his brothers. He also wears a red bowtie, corresponding with his hair and eye color, and his choice of Fire-type Pokémon.

In the games, he's hot-tempered and competitive. Chili's personality differs from Cilan's, as he possesses a fierce determination and confidence.

The name Chili comes from "chili pepper", a spicy fruit.

His Japanese name, Poddo, may come from the name of pod corn, following the corn theme of his brother's Japanese names and the plant-based naming of most characters. The kana that make up his name are also similar in appearance to ホット (hot).

He is the first Gym Leader only if Snivy is chosen. When Bianca was recruiting the Gym Leaders to battle Team Plasma, she could not reach the trio because she was late.

He's no longer a Gym Leader. If Memory Link is used, it is shown in a flashback that the trio begin to question their strength after being unable to battle Team Plasma, as general opinion is that it needs the three of them to make a good trainer, and discuss what needs to be done to correct that. Suddenly the Shadow Triad assaults them on a "whim", and both sides engage in a Battle. However the Shadow Triad easily defeats the Gym Leaders, which makes them leave so as to check on the other Gym Leaders that can be a true threat. The humiliating defeat, makes them admit they can only succeed as a trio. They then decide to resign as Gym Leaders and restart their training from scratch, so that eventually one of them can become a recognized trainer, then when their strengths match each other again, they can be a trio of Gym Leaders once more. They then think on who will be the new Gym Leader.

The Striaton City Gym Leaders in the Masters trailer (anime)

Chili's VS. sprite in Black & White 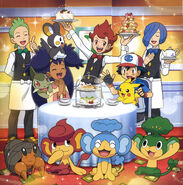