Chewtle is a small Pokémon that resembles a baby turtle. It has light green skin with orange spiked head and cheeks. Like any turtle, Chewtle has shell with the top half dark green, the bottom half beige, and the brown line between them. It also has a single upper tooth that it teethes with. It has small black eyes with a thin unibrow.

Chewtle snaps at anything in front of it because of an itch of its teething. It is known to attack first with its horn, flinching them before biting down and not letting go. For this reason, they prefer to use their horns first in combat to charge at foes. It is only when they see their enemies flinch and give them an opening that Chewtle will chomp down with all of their might. Both their horns and their shells are rock-hard. However, their huge heads make Chewtle unable to retreat back into their shells like some other chelonian Pokémon. Instead, these Pokémon will choose fighting over hiding when it comes to danger, fearlessly biting those who try to harm them.

Chewtle debuted in The Climb to Be the Very Best!. It was found on Wyndon, where it bit Jessie's hair harmlessly in the morning. Team Rocket eventually kept Chewtle as a lucky catch and a present for their boss Giovanni, because not only it attracted to them, but also has a potential to evolve into a Drednaw, then Gigantamaxing like the previous Drednaw they failed to catch yesterday night before it.

Chewtle is likely based on a baby snapping turtle.

Chewtle is a combination of chew, turtle, and possibly brutal. 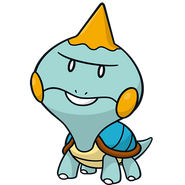 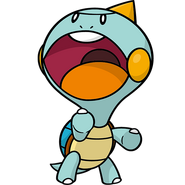