After evolving from Quilladin, Chesnaught becomes more muscular, unlike its pre‐evolution. Its fur has also turned red and its head to body proportions are now more humanoid. Its face has a more serious expression, and it also gains a beard that extends underneath its chest plate. It has a long tail and three claws on each limb.

With its tough, spiky armor, Chesnaught resembles a knight.

Chesnaught's armour protects it from attacks, and its Tackle attack is said to be extremely powerful to the extent it can flip a 50‐ton truck. By bringing its arms together, it can form a shield. It is also Bulletproof and can withstand an explosion.

Chesnaught is known to be a gentle Pokémon, who is very protective of the ones it loves. It will use its own body to shield its Trainer from harm and will become violent if it feels they are threatened. Given their sturdiness and selflessness, it is no wonder that so many trainers in Kalos end up raising Chesnaught as their starter Pokémon.

Chesnaught evolves from Quilladin starting at level 36. It is the final evolved form of Chespin.

Chesnaught comes from chestnut and juggernaut. 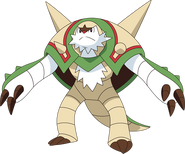 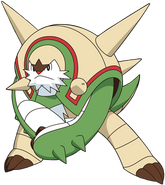 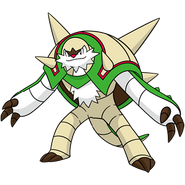 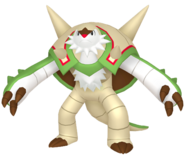 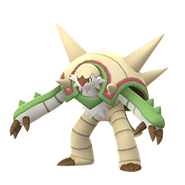 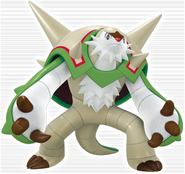