Cheryl in other languages

Cheryl is a character that first appears in Eterna Forest. She can join the player during an event in Pokémon Diamond, Pearl, and Platinum. She asks the player to escort her to the exit because she's afraid she might run into Team Galactic. She can later be found in Sinnoh's Battle Tower competing against the player character.

Like her outfit suggests, Cheryl is somewhat plain and humble in demeanor. She is also kind and greatly respectful towards others, as she heals the player character's Pokémon free of charge when they travel together. However, despite her plainness and kindness, Cheryl is strong and competitive in Pokémon battles, often trying to strike a balance between offense and defense. 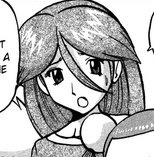