Basic Badge
Cheren is one of two friends/rivals the main character has in Pokémon Black and White Version. All three of them reside in Nuvema Town. He is the rival that picks the Pokémon that has a type advantage against the player character's.

Cheren is a tall, slender young man with very pale skin, black eyes, and jet-black hair with a small tuft that sticks up from the top of his head.

Cheren wears a blue coat and a white shirt with an orange Y-shaped pattern, a black belt with a silver clasp, black dress pants, and blue shoes. He sports spectacles with orange rims.

Cheren is a very serious, studious Trainer, whose goal is to become the Champion. He is rather stoical, but kind and respectful to the player character.

The name Cheren comes from čéren (Bulgarian for "black"). This goes alongside Bianca's name, who comes from "white".

Cheren is a very intelligent boy. His starter will always have an advantage over it and he will often challenge the player character to battles.

After defeating N and Ghetsis, Cheren appears before the player's house, where he says that he is going to explore the region, starting from Route 1.

He can be seen outside of Nimbasa City, where he recalls the day that he met Alder, and how it was the start of his new look on becoming stronger. He then says he will go to the Pokémon League, where the player may choose to battle him once per day atop Victory Road.

Cheren appears in Pokémon Black and White Version 2 as a Normal-type Gym Leader. He serves as a replacement for Lenora and will award the Basic Badge to challengers who defeat him. On a call on the Xtransceiver, he will talk about the types the Pokémon are weak against and the Pokémon abilities. He also appears often throughout the course to help the player character out or to give them advice.

Cheren in Pokémon the Series (anime) 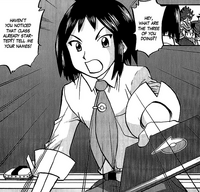 Cheren in the Black 2 and White 2 trailer (anime)

Cheren with his Stoutland in the Masters trailer (anime)

Cheren's VS sprite in Black and White

Cheren's VS sprite in Black 2 and White 2