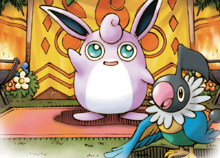 Although he means well, he can be somewhat hotheaded. His personality is also somewhat erratic, but to a lesser extent than Wigglytuff. Though he always has the Guild's best intentions at heart, he's known to be rather harsh, such as sending the players to bed without taking supper for failing a mission without allowing them to explain themselves. He is somewhat paranoid, mostly about Wigglytuff getting mad, and sleeps at the top of the ladder out of the guild to ensure no one runs away. He is shown to care deeply for the Guild members, but will sometimes deny it, claiming his actions are for the Guild's best interests. He, like most everyone, fell for Dusknoir's lies and had a lot of respect for him, shown by how much convincing it took for him to believe the team's story after they escape the future.

Chatot accompanies the player and its partner during the Brine Cave exploration, up until the relay point, where he angrily chases Team Skull, after they stole the partner's Relic Fragment and Chatot discovered how much trouble they'd caused the team. After reprimanding the wounded Team Skull, he heads forward, and when the player and partner spot him, he protects them and takes a powerful attack from Kabutops and the Omastar brothers in their defense, much like before, where he explored the same dungeon with Wigglytuff, and was attacked in the same manner, taking the hit for Wigglytuff. After the team defeats the Fossil Pokémon, the guild takes Chatot back to the guild to tend to his wounds.

After the credits roll, in the team's Mystifying Forest exploration, he plays as one of the "minions" of "the grand master of all things bad," for the team's graduation exam. Despite the team discovering the truth, thanks to Bidoof, the guild denies it to no end.

Retrieved from "https://pokemon.fandom.com/wiki/Chatot_(Mystery_Dungeon)?oldid=1107501"
Community content is available under CC-BY-SA unless otherwise noted.