For the variant appearing in the games, see Charon.

Charon in other languages

Charon is a character appearing in Pokémon Adventures, who was a commander of Team Galactic.

This section, or a part of it, has been transcluded from Charon; any changes involving it should be made there instead. /

Charon is a short man, who has patches of pointy lavender-colored hair. He wears a grey shirt and black trousers like most Team Galactic members do, with a logo on his chest, as well as grey shoes with black soles. He also wears a lab coat, and red-tinted round glasses.

Charon is a man, obsessed with powerful Pokémon. He finds only the Legendary Pokémon worth to use. He shows brutality like the rest of Team Galactic, but he also displays some cowardice to escape from a lost battle.

His name comes from the largest moon of the dwarf planet Pluto. His name might also come from the figure in Greek mythology, the ferryman of Hades.

In Japanese, Charon is named Pluto, after the dwarf planet and former ninth planet (which in turn was named after the Roman god of death and the underworld).

Per demand, Charon rushed into the laboratory of the Team Galactic building. However, he saw nothing was prepared yet for him to work. The grunt explained they entrusted a mission to him, but Charon cut the talk, considering that the three Lake Pokémon - Azelf, Mesprit and Uxie - haven't been captured yet. He reminded without their crystals, they could not create the Red Chain to control Dialga and Palkia.[1] Cyrus observed as the three air shuttles were coming to Veilstone City. He ordered Charon to start with the next phase of the plan, who agreed.[2] Charon started his work, while Cyrus observed him until his three commanders arrived. Charon attended Cyrus' speech, who announced that the scientist was making research on creating the Red Chain.[3]

Charon continued conducting research, and was impressed by Cyrus' grand words to create a new universe.[4] When Cyrus gave order to his commanders to go to Spear Pillar at Mt. Coronet, Charon mused to himself that he should go there as well.[5] In fact, while he was there, Charon used his device to force Dialga and Palkia to battle each other, ignoring Cyrus' Red Chains. He knew that the clash between two Legendary Pokémon would not create a new universe, but a portal to the Distortion World, all to complete his goal to capture all Legendary Sinnoh Pokémon.[6]

Charon observed Regigigas, and wanted to obtain it by ambushing them. However, he refused to do so, as he had a much more important plan. He looked at the hole, and thought that everyone was foolish, for everyone believed it to be a seed for the new world. Diamond noticed the scientist, who tried to escape, but was stopped by Byron, the Underground Man, Mr. Berlitz and Professor Rowan. Byron took his device, despite Charon's warnings not to fiddle with that. This caused gigantic tentacles to emerge and pull Dialga, Palkia and Cyrus through the hole. Platinum went to Charon, who was held by Byron's Bronzong, and asked if the thing she saw inside the hole was a Pokémon. Charon smiled, and dared her to investigate more. He introduced himself, and asked of Platinum to remember his face. Charon dropped some smoke and attempted to escape. Diamond's Kit stretched its tongue to get Charon, who escaped. However, Diamond noticed that Kit got Charon's notebook.[7]

Charon was at Battle Zone, as a new plot was unfolding.[8] Two Team Galactic grunts spotted Buck approaching Stark Mountain. Charon nevertheless became pleased, and had the grunts continue stalking Buck.[9] Bertha thought of Charon, and felt he had some malicious plans involving the Legendary Pokémon, which were listed in his memo. She felt it would lead to a tragedy, a greater one than the clash between Dialga and Palkia.[10] Charon, in fact, anticipated Buck to obtain the Magma Stone, which released a lot of energy to cause an earthquake. With the second earthquake occurring, Charon managed to find Heatran, who awakened, and confronted Looker and Buck with it.[11]

Charon confirmed that Heatran belonged to Team Galactic, and had it attack with Magma Storm. Looker and Buck hid under the invisible cloth, while Charon thought of attacking in the general area to have Heatran burn them. Charon reminded he was Team Galactic's commander, and found it fortunate that Buck removed the Magma Stone, since he didn't know what was needed to awaken it. It was why he knew Buck had knowledge of the mountain, and had the grunts stalk him. As a grunt unveiled Looker and Buck, Charon had the grunts capture them. As he had Heatran attack, Looker used a tape to bind Charon's mouth, and demand him why would he capture Heatran. Charon laughed, for he needed to prepare forces for the other side of the world, which was nothing like this world, in which Team Galactic had no interest in anymore. Looker realized that Charon was speaking about the Distortion World, and his and Platinum's quests were linked together.[12]

Charon visited Paka and Uji at the Distortion World, and confirmed their claims that without Dialga and Palkia, Giratina could cross worlds to Sinnoh. Paka and Uji suspected that he didn't come to rescue them, which Charon confirmed, for he came for different reasons. He let them watch Giratina confronting Diamond and Pearl. When Diamond's Reg came out to face Giratina, Charon became amused to see so many Legendary Pokémon in one place. Diamond and Pearl saw Charon nearby, who came to capture all the powerful Legendary Pokémon. He declared he needed to get rid of Diamond and Pearl, and sent Heatran to attack Reg.[13] Charon laughed as Diamond and Pearl struggled with Heatran, who was attacking Reg. He declared that the ruler of the other world, who was banished for its violent crimes, was Giratina. Reg halted Heatran, to which Charon refused to let Diamond and Pearl foil his plans: Giratina had to go on a rampage. Seeing that the boys had his notebook, which was deciphered, he had Heatran use Magma Storm. Reg used Crush Grip, which stopped Heatran, and displeased Charon that his plans were failing.[14]

Charon watched Pearl confronting Giratina, and mused that the boy could predict the Pokémon's moves. He had Slowking use Trump Card to attack Giratina, who fled using Shadow Force. Charon made this move to let Giratina use the move on Pearl. However, Diamond leapt away to save Pearl, and got hit by the attack instead. Charon noted this wasn't his plan, but was pleased that he got rid of one of the boys. More importantly, Charon laughed to see that Regigigas, who no longer had a trainer, was walking away from the battlefield.[15] Charon laughed, as Diamond was defeated, and Pearl had no strength left to battle. He even taunted him, believing he could even have Giratina attack them, or destroy the cities. Pearl declared he would never forgive Charon, whose Slowking blew Pearl away. However, Pearl's willpower was not broken, as he sent his and Diamond's Pokémon out to battle. Charon noticed they acquired Rotom, but declared it won't be enough, as he had Heatran and Giratina. However, Reg returned with Rotom's appliances; while Rotom shifted forms to attack Charon, Reg confronted Giratina. As Giratina was knocked down, it fled through the hole it came from. Charon panicked, and went on his machine to follow Giratina. Reg attacked his machine and damaged it, but Charon managed to go through the hole.[16]

In the Distortion World, Charon became displeased to have encountered Diamond and Pearl, who interrupted his plan, and swore to heal his Heatran. Eventually, Charon visited the Team Galactic commanders in the Distortion World, and pretended he came to save Cyrus. Saturn didn't believe him, but Charon left the trio to deal with Mira, Cheryl and Marley, who came to take revenge on him.[17] Charon visited Diamond, Pearl and Platinum. He laughed at the Team Galactic grunt, belittling it for not having Darkrai under his control. Charon declared he had taken control of Darkrai, and would do the same with the rest of the Legendary Pokémon. Charon looked at Giratina, and was surprised to see Shaymin atop of its head. Giratina started its fight with Dialga and Palkia, and looking at the rest of the legendary Pokémon, Charon became extremely pleased, as he could take control of each and every one of them. Platinum refused to let him succeed, to which Charon's Slowking used Psychic. However, Platinum's Pokémon defended her.[18]

Charon became annoyed by Platinum, who defeated her Slowking. Charon bemoaned that regular Pokémon were useless. Seeing that even Heatran got defeated, Charon had Darkrai lull everyone to sleep. He became amused, and had Giratina use Dragon Pulse to attack. At that moment, Shaymin used Worry Seed to wake everyone up, to defend themselves. Charon became very upset, and fell on Giratina, who flew away, with Diamond, Pearl, Platinum and Shaymin following him. Charon emerged from the Distortion World, and thought how he could trap everyone in that world. However, as he came out, he got attacked by Cynthia and Garchomp, who used Draco Meteor that caused a large explosion.[19]

Charon was badly hurt from the attack, and asked Cynthia how did she even know where Giratina would emerge. Cynthia pointed out that it would come to the place where there was lots of light, which it didn't have in the Distortion World, to Sunyshore City. Charon, however, refused to give up, and disappeared in a flash of smoke. However, even then he was cornered by Diamond, Pearl and Platinum, who were riding Dialga, Palkia and Cresselia. Charon claimed he even analyzed their Pokémon, and had Giratina close to hole, to trap their allies inside the Distortion World. Diamond, Pearl and Platinum sent Chatler, Lax and Rapidash to take the device, but Charon made them fight each other. However, Charon got attacked by the Taurina Omega robot, which was controlled by Rotom, and the device Charon held was dropped on the floor and malfunctioned. As people emerged from the Distortion World, Cyrus did, too, and confronted Charon. Charon bowed down, pretending that he captured all the Legendary Pokémon to serve Team Galactic. Cyrus picked up his device, which could take control over Pokémon, and noticed it was used at the Spear Pillar. Saturn pointed out that Charon used the device to control Dialga and Palkia, and was even aware that their clash would not create another universe, but a portal to Distortion World. Charon denied, and admitted he crossed the line, to the point he wanted to be punished, so he could continue his work. Cyrus, however, announced that Team Galactic would be disbanded. As Cyrus went away with his commanders, Charon yelled out wasn't there someone to stop the villains. In that moment, Looker appeared and arrested Charon, confirming he was there to stop them.[6] 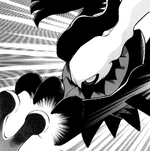