Charjabug resembles a small Subway train/battery. Its body is colored green, it has blue square eyes, a rectangle gray mouth, and orange pincers.

Since one is preparing to evolve, it usually looks motionless. Most of the time it buries its body for spending time underground.Charjabug are a bit more active than other intermediate insects, though this isn't saying much. Unlike Metapod or Cascoon, Charjabug are capable of consuming solid foods. They are opportunistic feeders that eat whatever plant matter they can find nearby, including decaying humus. Charjabug use what little food they eat to produce electrical energy using special organs in their abdomens; they can also siphon power from generators, and in fact seem to prefer this (as this method does not require movement). They then store this energy inside electric sacs within their bodies, which they can utilize to defend themselves from foes by discharging electricity from the tips of their jaws. Their sturdy shells also help keep them protected from predators. Their evolutions Vikavolt will hold and draw electricity from them to defend themselves.

Charjabug can lend their stored electricity to allies and appliances; one Charjabug can power a whole house for a day, making them popular partners when camping.

Before Generation VIII, Charjabug evolves into Vikavolt when leveled up in a special magnetic field. In Alola's case, they are Vast Poni Canyon and, in Ultra Sun and Ultra Moon only, Blush Mountain.

In Generation VIII, due to the lack of a magnetic area, Charjabug evolves into Vikavolt when exposed to a Thunder Stone.

Charjabug is based on a battery and a bug cocoon. Its two yellow spines make it resemble a two pronged electrical plug. It may also be based on the larva of the Monema flavescens, whose sting is said to feel like a jolt of electricity. Its cry also alludes to it being based on an accordion. Its eyes also look similar to the symbol of a battery power on a phone. Charjabug can also be similar to a car when equipped with a car-based spare parts for Charjabug Race competitions. Its Shiny coloration reflects this, as it gained a red shell, resembling a London bus.

Charjabug comes from charge or charger and bug.

Its Japanese name, Dendjimushi, comes from denchi (battery), mushi (bug), jimushi (grub) and denkimushi (the name given to the larva of the Monema flavescens moth). 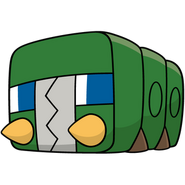