Chandelure is a black and purple Pokémon that resembles a ghostly chandelier. It possesses a large round glass head containing blazing purple flames which flare out from the top and multiple arms tipped with purple flames extending out from its base. It has two black arms with two candle-like extensions sprouting from each arm. Its mouth area consists of black stitch-like designs, and it has two large circular gleaming yellow eyes.

Legend claims that by waving its arms about, Chandelure is able to mesmerize its victims and drain their life force in order to power up its own flames; any victim drained of their spiritual essence would end up as a hollow shell. However, Chandelure appears to be a very loyal and safe Pokémon when owned by an experienced trainer.

Chandelure is the final evolved form of Litwick, and evolves from Lampent, at any level, with the use of a Dusk Stone.

Subway Boss Ingo owns a Chandelure, while his twin brother, Subway Boss Emmet, owns an Eelektross. Ingo's Chandelure helped to thwart Team Rocket's scheme in Battle for the Underground!. It later appeared once more in Lost at the Stamp Rally! where Ingo used it to battle alongside Emmet's Eelektross against Ash's Tepig and Cilan's Pansage in a Battle Subway double battle. Ingo's Chandelure and Emmet's Eelektross, being powerful and fully-evolved, defeated Ash and Cilan's Pokémon and won the battle.

Chandelure is based on a haunted chandelier. The flames of this Pokémon's line are a play on the depiction of ghosts/spirits appearing as ghastly flames/lights in Japanese culture, and possibly the legend of the will-o'-the-wisp.

Chandelure comes from chandelier and lure. 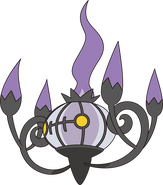 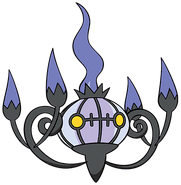 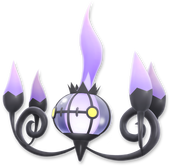 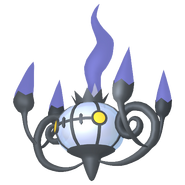 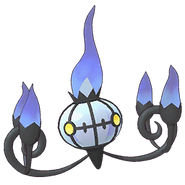 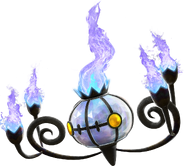 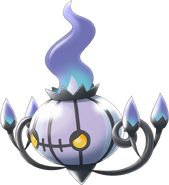 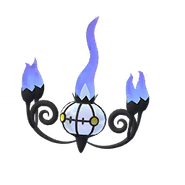