Chairman Rose in other languages

Chairman Rose is a character that was introduced in Generation VIII. He is the chairman of the Galar Pokémon League, the main antagonist of Pokémon Sword and Shield, and the president of the Galar base organization Macro Cosmos.

Chairman Rose is a tall and handsome tan-skinned man with black hair, green eyes, and neatly trimmed facial hair. Despite his svelte appearance, he also has a round, portly belly (although it's barely visible when he wears his regular attire). Clothing-wise, Rose has one ear pierced and usually wears a sharp gray business suit, as befits his status and wealth. His suit consists of a gray vest with numerous black buttons, a gray overcoat with a single gold button, a white shirt, and a red tie. He also wears classy gray pants that match his suit, along with a gold and black belt, pointed red and black shoes, and a gold watch.

However, when Rose is "undercover", he wears an outfit that clashes with his suave appearance (and altogether does a very poor job of disguising him). His undercover outfit consists of black sunglasses, a black hat with Rose Tower's symbol on it, a white long-sleeved sweater, and blue-green shorts with white polka dots all over them.

While Rose is friendly, well-meaning, and charming, he is also extremely impatient, reckless, and prone to making foolish decisions. During the events of the games, he almost destroys the entire Galar region because he is unable to wait a single day for an event that will happen a thousand years in the future. While he is well-meaning, does what he thinks is best for everyone, and eventually does change his ways, he is short-sighted and unable to see the long-term consequences of his actions until it is too late. After Eternatus is subdued, he gives Macro Cosmos to Leon and turns himself in, either because he sees himself as a criminal or seeks psychological help.

According to Oleana, Chairman Rose once worked in a coal mine many years before founding Macro Cosmos. He later became the then runner-up of the Pokémon League and earned his fame. 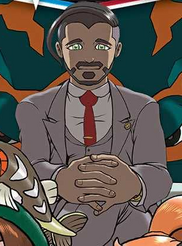 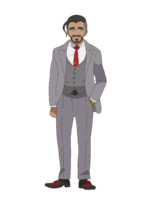