Centiskorch is a centipede like Pokémon with a mostly red and maroon body. It has 2 pincers with an X-shaped flame at each end, while its belly has circular radiator patterns. Its yellow eyes are triangular with brown pupils of the exact shape.

When it is in its Gigantamax form, it is much longer and its belly has turned yellow. The X-shaped flames are now longer. Unlike most Gigantamax forms, the 3 swirling red cloud are found on its tail as opposed to its head.

Whenever Centiskorch flares up, its body temperature can increase to 1,500 degrees Fahrenheit. It uses its long body as a whip and catapults forwards at its foes. Centiskorch also possesses sharp fangs. They are known to get in territorial battles with Scolipede. These battles usually end with the victor eating the other.

When imbued with Gigantamax energy, Centiskorch now radiates a more intense body temperature that increases by 500 degrees Fahrenheit. The intense heat waves that Centiskorch gives off can incinerate foes.

Its design is based on a centipede, specifically the Fire Centipede who glows like fire thanks to its bioluminescence. The fire markings on its face resemble a samurai helmet. The design on its stomach show it may be based on an oven or heater. It may also be based on a yōkai known as Ōmukade, a colossal red-headed centipede who was described as having legs like flaming torches and had a weakness to human saliva, possibly referencing the Fire type's weakness to the Water type. It may also be based on a whip as it is capable of learning moves such as Fire Lash and Power Whip and its Pokédex entries even state it lashes out just like one.

Its Gigantamax form may be playing on its Ōmukade origins even further and may incorporate elements of East Asian dragons, whom in legends regarding the Chinese Zodiac, centipedes are said to be the brother relatives of the dragon. Its battle animations which show it coiling into a radiator shape may also be another design origin.

Centiskorch derives from centipede and a corruption of scorch. 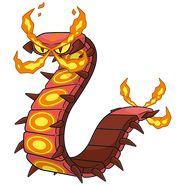